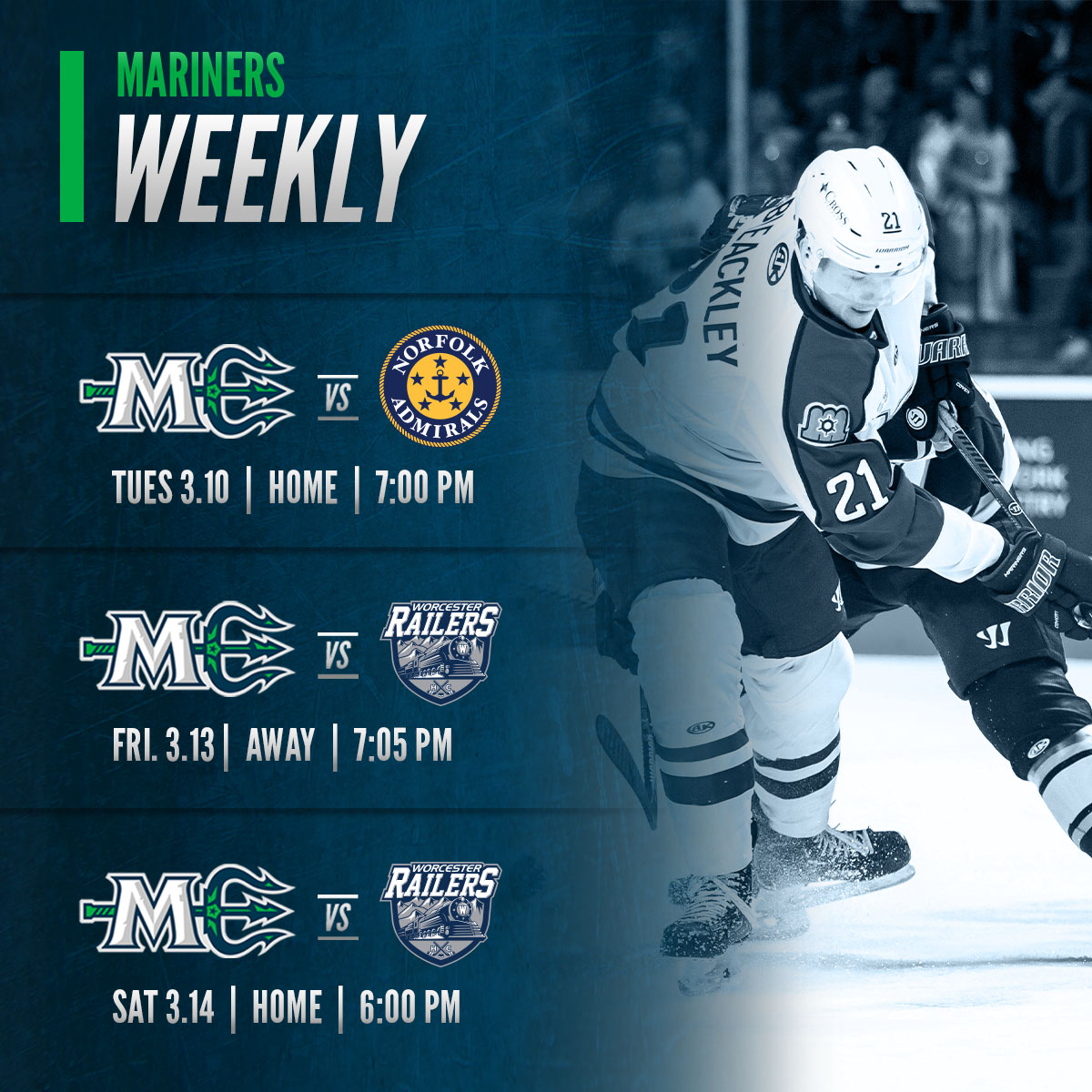 Mar. 9, 2020 – Double up the nautical puns for Tuesday’s meeting between the Mariners and Norfolk Admirals, as Maine looks to shake off some recent struggles, both overall, and at home. After playing three straight home games against top four teams in the Eastern Conference, the Mariners let a 2-0 lead slip away on Sunday afternoon against the Worcester Railers and fell in overtime. Despite the slump, the Mariners gained a key point in the playoff race, dropping their “Magic Number” down to ten points to clinch their first ever playoff berth. For more information on how the Magic Number is calculated, check out some “Magic Number 101.” Three games are on the schedule this week. The Admirals are in town tomorrow and then a home and home with the Railers over the weekend. Eleven games remain in the regular season.

There was a playoff atmosphere in the Cross Insurance Arena as the Mariners wore throwback jerseys and took on a Reading Royals team that they could face in the postseason. The Royals held a 1-0 lead through two before Pascal Laberge gave them insurance in the third. Michael McNicholas gave the Mariners life with a late goal, but former Mariner goalie Tom McCollum was fantastic, and made a clutch save on Conner Bleackley in the game’s closing seconds to seal the Reading victory.  FULL GAME RECAP & HIGHLIGHTS

The Mariners scored twice in the first period as Matt Nuttle got his first goal in a Maine uniform and Dillan Fox added a pretty power play goal in the final minute. Trailing 2-1 in the third, Worcester’s Tyler Poulsen tied the game on a breakaway, and forced OT. Both teams had to kill a penalty in overtime, but Railers forward Drew Callin ended the game during 3 on 3 at the 4:27 mark. It was only Worcester’s second ever win at the Cross Insurance Arena, in 13 trips. FULL GAME RECAP & HIGHLIGHTS 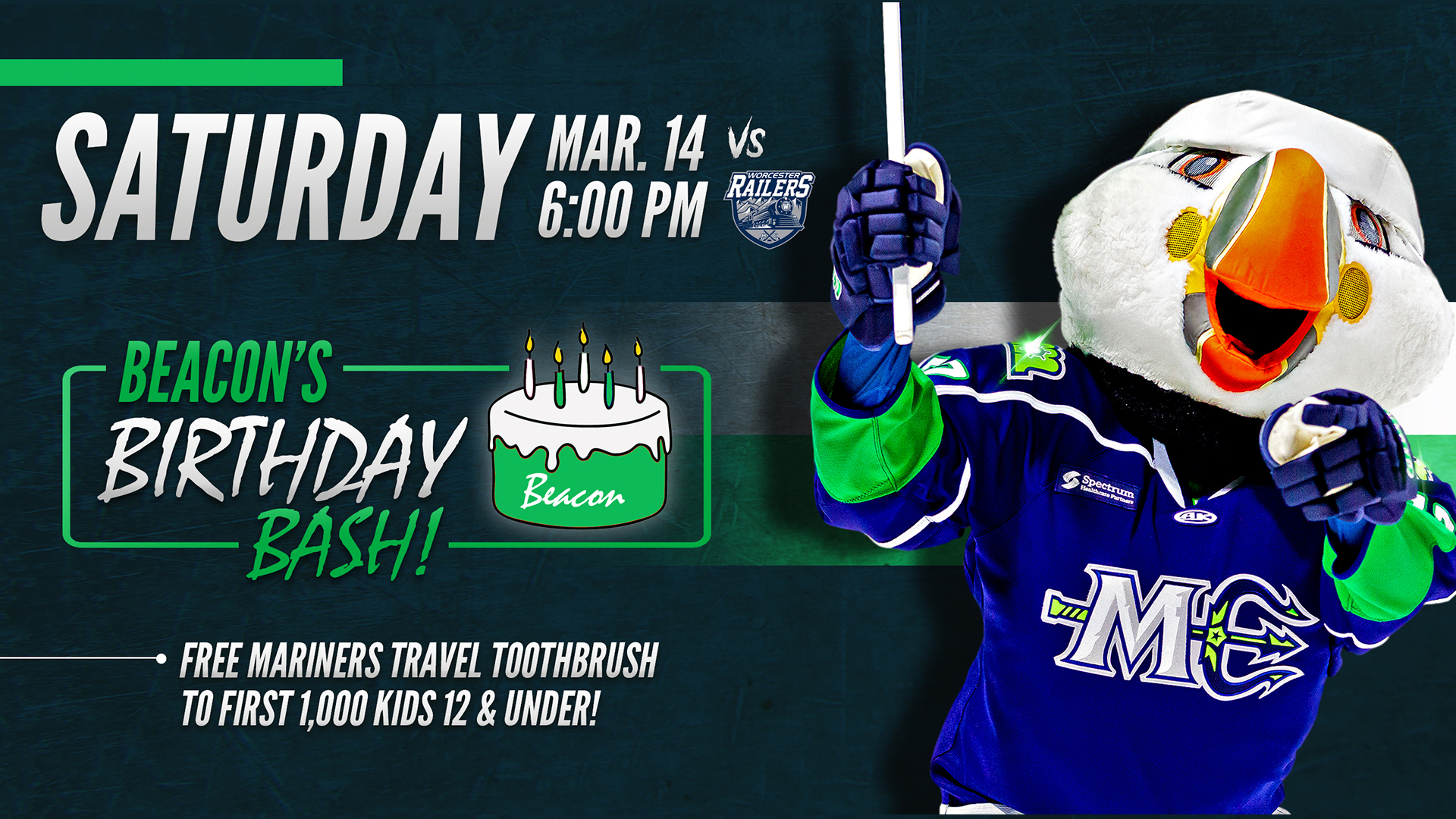 Tuesday is the final non-divisional game of the season as the Mariners take on Norfolk for the fourth time. The teams played a three game series in Virginia in November, with the Admirals winning two of three. Then, it’s a home-and-home over the weekend with Worcester. The Mariners and Railers still have seven meetings (of the Mariners’ final 11 games). Worcester’s next loss (or Maine’s next win/point gained), will officially eliminate them from playoff contention.

On Saturday, the Mariners celebrate Beacon’s second birthday with “Beacon’s Birthday Bash,” a celebration that will include several local mascots on hand. The first 1,000 kids in attendance ages 12 and under will get a Mariners travel toothbrush. Family Four Packs are available when purchased in advance: four tickets, four food and drink vouchers, and four Mariners beverage koozies starting at $80. After Saturday, the final Family Four Pack game of the regular season is Sunday, March 29th.

Doors open one hour prior to all Mariners home games, one hour and fifteen minutes for season ticket holders. 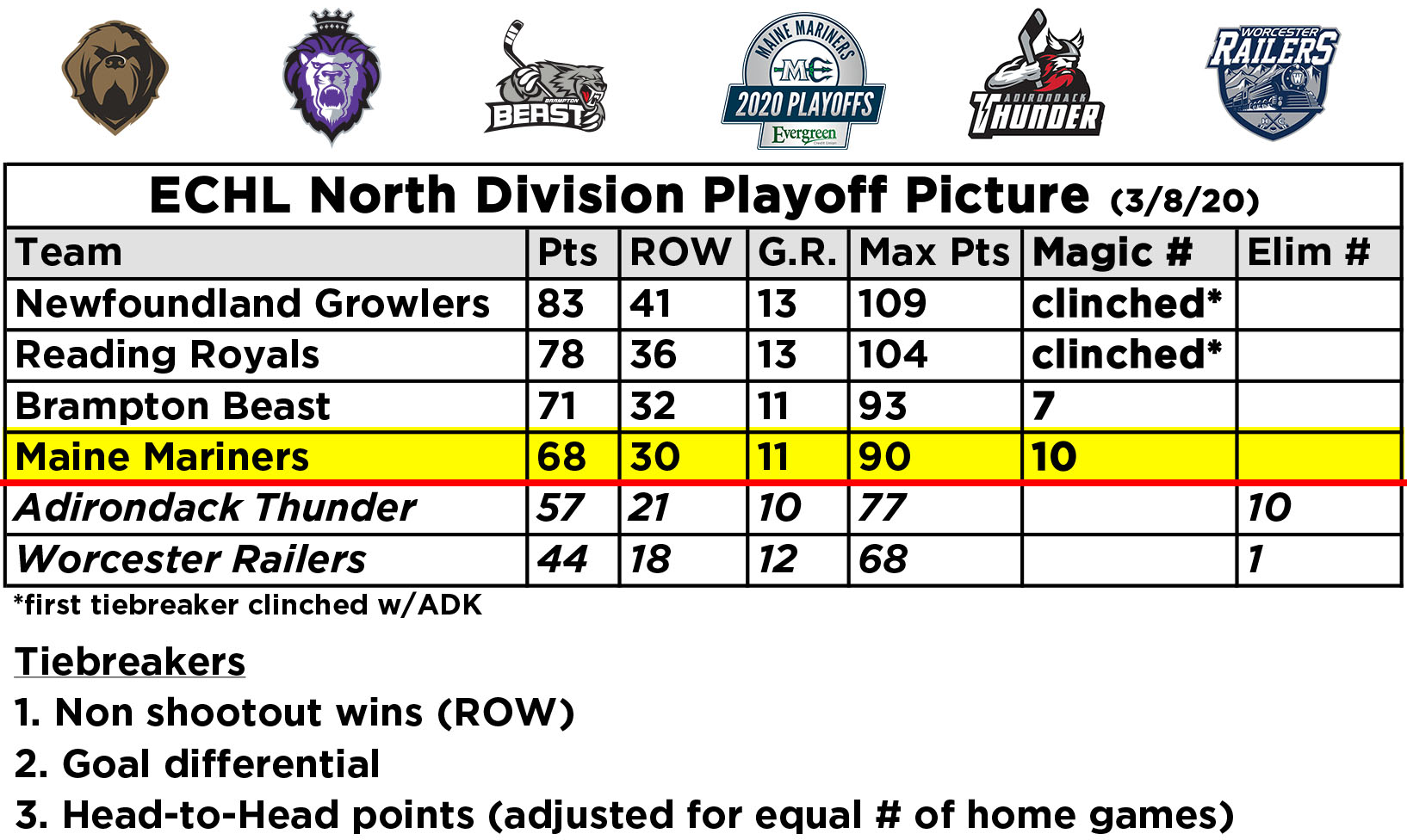 Looking ahead:
The Mariners final two home games are against Worcester on Friday, March 27th, and Sunday, March 29th. The 27th is Country Night, presented by 99.9 The Wolf, and includes ticket giveaways to upcoming country concerts. March 29th is Fan Appreciation Night presented by Redbank Village. The full promotional schedule can be found here.

The Mariners Coach’s Show airs this Thursday, March 12th from 6-7 PM, hosted by Mariners broadcaster Michael Keeley, broadcasting live at Three Dollar Deweys at 241 Commercial Street in Portland and airs online at MarinersOfMaine.com/listen. A Mariners coach and player will each join the show and meet with fans. Four tickets to an upcoming Mariners game will also be given away at Three Dollar Deweys at the end of the show. 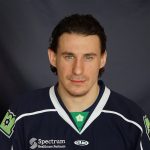