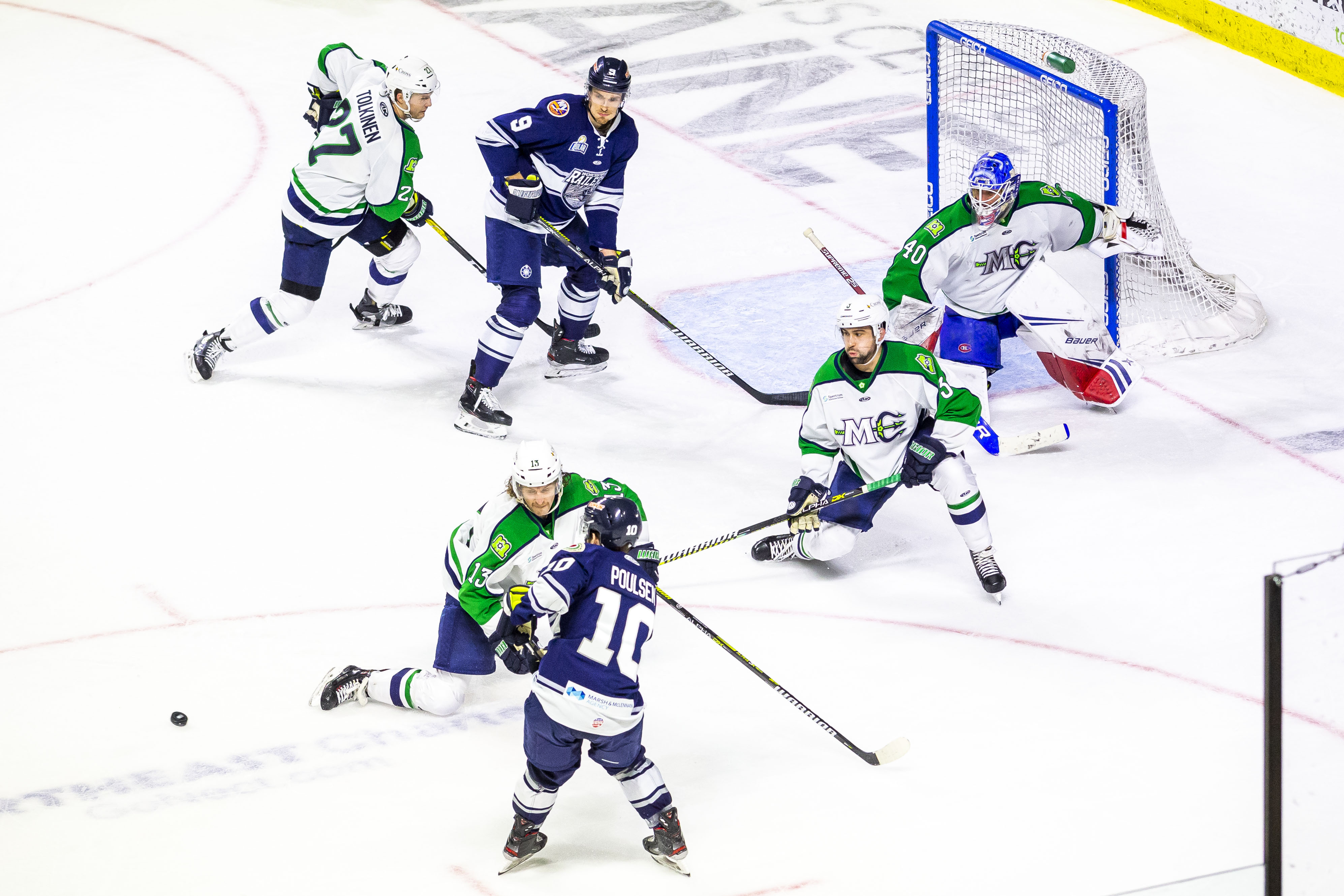 PORTLAND, ME – March 8, 2020 – Drew Callin scored a highlight reel game-winner at 4:27 of overtime to give the Worcester Railers a 3-2 win over the Maine Mariners on Sunday afternoon at the Cross Insurance Arena. The Railers rallied from a 2-0 deficit in the game to earn just their second win all time in Portland. The Mariners magic number to clinch a playoff spot fell to 10 by their gaining of a point in the standings.

The Mariners led 2-0 at the end of one thanks to goals from Matt Nuttle and Dillan Fox. Nuttle’s goal opened the scoring at 9:49 and was made possible by a great play from Conner Bleackley, who batted a puck out of the air and swung it from the bottom of the right circle to Nuttle on the back door with an empty net. Fox’s goal was quite impressive as well, as he stickhandled down the slot and tucked one in around the pad of Evan Buitenhuis in the final minute of the period – a power play goal.

“It was nice to get on the scoreboard,” said Nuttle, whose goal was his first as a Mariner. He had one earlier this season for South Carolina. “It was a great pass [Sturtz] to [Bleackley] and [Bleackley]  back to me so it’s always great to put one in especially on a new team.”

It remained 2-0 until the Railers got on the board midway through the 2nd. Justin Murray’s slap shot from the left point beat the glove of Connor LaCouvee at 10:09 of period two to make it a 2-1 game. At 11:44 of the third, Tyler Poulsen took one away from Mariners defenseman Jeff Taylor, skated in on a breakaway, and made a backhand move to beat LaCouvee to tie the game at two. Ross Olsson was called for high sticking with 1:35 left in regulation, but the Railers were able to force the game into overtime.

The Mariners were forced onto the kill early in the extra session with a too many men on the ice call, but the penalty kill got through it. At 4:27, Drew Callin protected the puck, did a full circle in the zone, and beat LaCouvee’s glove with a backhand to end the game. Worcester had not won a game at the Cross Insurance Arena since November 30th, 2018.

Buitenhuis stopped 30 shots to earn the win while LaCouvee made 28 stops.

The Mariners are home again Tuesday at 7 PM to take on the Norfolk Admirals in the final non-divisional game of the year. Next weekend they have a home-and-home with the Railers – Friday at Worcester and Saturday at 6 PM at the Cross Insurance Arena. It’s “Beacon’s Birthday Bash,” and the first 1,000 kids in attendance 12 and under will receive a Mariners travel toothbrush. Groups of 10 or more can get discounted tickets by calling 833-GO-MAINE. Individual tickets can be purchased at MarinersOfMaine.com, at the Trusted Choice Box Office inside the Cross Insurance Arena, or by calling 207-775-3458. All Saturday and Sunday home games also feature the Family Four Pack – four tickets, four food and drink vouchers, and four Mariners beverage koozies, starting at $80, and must be purchased in advance.