Feb. 26, 2019 – In November of 2010, 26-year-old forward Riley Armstrong got his first taste of the ECHL when he joined the Utah Grizzlies. Armstrong, who had spent the previous six seasons in the AHL, played just two games in Utah before deciding to take is career to Europe. Less than a year later, he was back in Utah as captain of the Grizzlies and would go on to enjoy one of the best seasons of his professional career. Nearly a decade later, now as head coach of the Maine Mariners, Armstrong brings his red-hot first year squad into the Maverik Center for three games this week, currently holding down the final North Division playoff position after winning seven of their last eight games.

After sweeping Norfolk to start their road trip, the Mariners entered the Santander Arena on equal footing with the Reading Royals, both teams seeking to move up the standings into a playoff spot. The Mariners simply had their best road start of the season, scoring the game’s first five goals. Terrence Wallin, Blake Kessel (in his Maine debut), Greg Chase, Johnny McInnis, and Dwyer Tschantz had the Mariners up big early in the 2nd period. The Royals got the next two goals but Dillan Fox seized momentum back by making it a 6-2 game and that was just about it until Reading scored twice in the final two minutes of the game: much too little too late. FULL GAME RECAP & HIGHLIGHTS

Friday, Feb. 22nd – MNE: 4, ADK: 3/OT
In a game with a distinct playoff atmosphere, John Furgele and Jon Edwardh traded first period goals. After the Thunder took their first lead in the middle frame, Taylor Cammarata scored his first Mariners goal to quickly respond and tie it up again. With less than seven minutes remaining in the third, Brian Ward’s goal was answered by Greg Chase’s coast-to-coast wraparound, which ultimately forced the Mariners’ third overtime game in five. The Mariners got a power play early in OT and none other than the former Thunder forward himself, Terrence Wallin played hero, deflecting home Josh Couturier’s shot from the point and giving the Mariners their sixth straight victory and fourth in four tries on the trip. FULL GAME RECAP & HIGHLIGHTS

Manchester struck twice in the first 5:05 of the game, and eventually took a 3-0 lead, putting Maine in a big hole midway through the game. Dwyer Tschantz scored his fourth goal of the road trip before the 2nd ended and Charles-Eric Legare, playing his second game on an ATO would cut the deficit to one halfway through the third. A late Mariners penalty yielded an insurance goal for the Monarchs and an empty netter officially signaled the end of the win streak, marking the second time this season that Manchester ended a 6-game Maine win streak at the SNHU Arena (Dec. 31st, 2018). FULL GAME RECAP

Sunday, Feb. 24th –WOR: 3, MNE: 4/OT
The Mariners returned home for the first time in 11 days, and found themselves behind the Worcester Railers for the second consecutive Cross Insurance Arena contest. The Mariners were down to seven forwards for a spell after Ryan Ferrill received a game misconduct, Terrence Wallin was injured, and Greg Chase was called for a ten minute misconduct. Dillan Fox quickly erased a 2-0 deficit when he scored twice in a two minute span in the 2nd. Worcester’s 3-2 lead in the third period was short-lived after Johnny McInnis scored the equalizer, setting the stage for yet another OT game. The Mariners killed a penalty in the final two minutes of the overtime and managed to come out on top in a wild seven round shootout – Josh Couturier’s goal turning out to be the game-winner. FULL GAME RECAP & HIGHLIGHTS

It’s the first Mountain Division opponent of the season for Maine, which is 4-2-0 outside the North Division. For the Grizzlies, the Mariners represent the first opponent outside of the Western Conference. Utah is currently third place in a very top-heavy Mountain Division, where their 31-17-4-2 record is behind Idaho and Tulsa. The Grizzlies recently lost three consecutive games to the ECHL bottom-feeding Allen Americans, and have dropped five straight overall.

Looking ahead:
Upon their return from Utah, the Mariners leave New England (Worcester, Manchester, Maine) for just one trip in the final 14 games. A three game homestand begins March 6th against the Norfolk Admirals with a sensory reduced game as part of “Autism Awareness” night. More information on that game is here. On March 8th, the Stanley Cup® is in the building, and on March 9th, it’s Wild Blueberries Night presented by Northeast Charter & Tour, Co. The South Carolina Stingrays are the opponent for both games. A full promotional schedule is here. 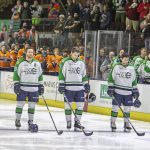