GLENS FALLS, NY – February 22, 2019 – Terrence Wallin returned to the place he called home for parts of the last three seasons and played hero, scoring at 3:17 of overtime to give the Mariners a 4-3 win on Friday night at the Cool Insuring Arena in Glens Falls. The win gave the Mariners a season high fourth straight road victory and sixth in a row overall.

The Mariners scored the first goal for the seventh consecutive time in their head-to-head series with the Thunder when John Furgele was able to get a shot through Evan Cormier at 8:02 of the opening period. Furgele got his fifth goal of the season with Greg Chase getting the only assist – his 16th point of February. Adirondack tied it up at 16:49 when Jon Edwardh finished a two on one by tipping a pass from Peter MacArthur past Connor LaCouvee. The Mariners and Thunder combined for 31 first period shots.

The Thunder took their first lead of the game at 10:44 of the second period when Nikolas Olsson scored his first ECHL goal, beating LaCouvee in the slot, set up by Brian Ward from below the goal line. It took the Mariners less than three minutes to tie the game again, when Taylor Cammarata finished a Wade Murphy rebound to make it 2-2 at 13:01. It was a 2-2 game through two.

Still tied at two into the late stages of the 3rd, Each team took a penalty a minute apart and Jake Linhart fed Brian Ward for a deflection to beat LaCouvee during 4-on-4 and make it 3-2 Thunder with less than seven minutes remaining. Chase continued his remarkable month less than two minutes later when he drove down the left wing and finished a wraparound at the back post to re-tie the score. Each team gained a point as they played OT for the second time head-to-head this season.

Ward tripped up Blake Kessel midway through OT, giving the Mariners a 4-on-3 power play, in which they quickly converted on to end the game. Cammarata fed Josh Couturier, whose blast from the point was tipped in by Wallin at 3:17. The Mariners have won eight consecutive games that have gone beyond regulation, and are now 5-0 in 3-on-3 OT.

LaCouvee earned his 19th win, making 31 saves. Cormier stopped 32 in the losing effort. The Mariners moved within a point of Brampton for fourth place in the division, and within two of Manchester, who they’ll visit tomorrow looking for a perfect road trip.

The Mariners face the Monarchs at 6:00 PM tomorrow night at the SNHU Arena. They return to Portland on Sunday at 3:00 PM against the Worcester Railers, with a full team autograph session to follow the game. Single game tickets can be purchased HERE or by visiting or calling the Trusted Choice Box Office: 207-775-3458. 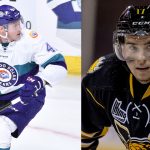