PORTLAND, ME – February 19, 2019 – The Maine Mariners announced the acquisition of forward Taylor Cammarata from the Wichita Thunder on Tuesday. In a corresponding move, Jason Salvaggio was called up to AHL Hartford and loaned to Wichita.

Cammarata is a 23-year-old forward from Plymouth, MN who played four years at the University of Minnesota following a two year USHL career. In his final year of Juniors, he led the USHL in scoring, with 93 points in 59 games for the Waterloo Black Hawks. In his first two seasons with the Golden Gophers, Cammarata put up identical 27 point campaigns, finishing second on the team with 24 assists as a Sophomore. In 2013, Cammarata was selected by the New York Islanders in the 3rd round of the NHL Draft: 76th overall.

In the fall of 2017, following his graduation from Minnesota, Cammarata signed his first pro deal with the South Carolina Stingrays. In 42 games last season, he scored 12 goals, along with 19 assists in 49 games. The 5’7, 161-pound forward began this season in Norfolk, and was traded to Wichita in January. Between the two teams, he has 14 goals and 20 assists in 51 games.

Forward Jason Salvaggio was called up to AHL Hartford, and loaned to Wichita. Salvaggio has 10 goals and 16 assists in 42 games with Maine this season, including scoring the first goal in franchise history on October 13th against the Adirondack Thunder. Salvaggio signed with the Wolf Pack last April after finishing his college career at the University of New Hampshire.

The Mariners are in the midst of a five game road trip, playing tomorrow night in Reading at 7:00 PM. They will then visit Adirondack and Manchester over the weekend. The next home game is Sunday, February 24th at 3:00 PM against the Worcester Railers. A full team autograph session will follow the game. Single game tickets can be purchased HERE or by visiting or calling the Trusted Choice Box Office: 207-775-3458. 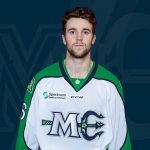