Jan. 1, 2019 – The Mariners ended 2018 with a loss in Manchester, but went 9-5-0-0 in the month of December and are playing their best hockey of the season. As the calendar turns to 2019, they’ll finally face a team other than their two closest geographic rivals, as a weekend home series against Brampton will break a string of six straight against either Worcester or Manchester.

Some instant chemistry was discovered between Ty Ronning and debuting forward Greg Chase. Their line, along with Justin Breton each pitched in two points as the Mariners built up a 4-1 lead in the third period. The Monarchs battled back to get within one, but ultimately fell to the Mariners for the fourth straight time head-to-head. Morgan Adams-Moisan’s power play goal in his first game upon returning from the AHL was the game-winner. FULL GAME RECAP & HIGHLIGHTS

Worcester got the 2-0 jump in the first period and the Mariners had to fight tooth and nail to solve Railers goaltender Mitch Gillam. Greg Chase got one in the second and with 6 minutes left in the third, Michael McNicholas stuffed home a wraparound to force OT. A scoreless edge-of-your-seat overtime period posited a shootout, in which Kile and McNicholas scored to seal win #6 in a row. The game also featured a pair of fights. FULL GAME RECAP & HIGHLIGHTS

Saturday, Dec. 29th – MNE: 3, WOR: 1
In Hannu Toivonen’s Mariners debut, they staked him to a 2-0 lead after one on goals by Morgan Adams-Moisan and Greg Chase (yet again). Toivonen stopped 16 in the second period to preserve the lead and Michael McNicholas continued his big weekend with a power play goal in the third. Toivonen’s shut out big was spoiled with 1:36 to go when Nick Sorkin beat him, but his 41 save performance earned him first star to complete the undefeated week. FULL GAME RECAP & HIGHLIGHTS

-With their 6/6 performance on Saturday, followed by 3/3 on Monday, the Mariners now possess the ECHL’s top penalty kill at 87.4%.

-The Mariners have a season high three game road win streak to go along with the six game overall streak
-The Mariners have points in 12 of their last 13 home games, wins in 8 of 9, and ran the table in December (5-0-0)
-Morgan Adams-Moisan has 9 goals in his last 11 Mariners games, the first 9 of his pro career (he played one game with AHL Laval in that span)
-The Mariners are now 8-3-0-1 in one goal games

The Brampton Beast make their first ever visit to Portland this weekend. It’s another 1-2-3 Friday coming on this Friday with $1 hot dogs, $2 popcorn, and $3 Bud Light Drafts through the start of the 2nd period.

Saturday night is “Throwback Night,” paying tribute to the original Maine Mariners. The team will wear original Mariners jerseys, which will be auctioned off live post game. The first 2,000 fans through the door will also receive a commemorative Mariners throwback logo puck.

Doors open one hour prior to all home games. Tickets can be purchased HERE or by calling the Trusted Choice Box Office at 207-775-3458. 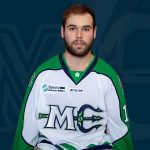