PORTLAND, ME – December 26, 2018 – In another roster move that will add size to the roster, the Mariners announced the signing of 6’6, 236-pound forward Louie Rowe out of Arizona State University. Rowe is currently in his Senior season with ASU, but has only played in five games for the Sun Devils.

Rowe, 24-years-old, is a native of East Lansing, Michigan. He spent one season in the NAHL with the Texas Tornado and two in the USHL with the Omaha Lancers. In January of 2015, he announced his commitment to Arizona State. After not appearing in a game his freshman season, Rowe got into all 32 in 2016-17, with seven goals and ten assists. He also wore an “A” on his sweater during his Sophomore and Junior seasons. He once again played in 32 games last year, scoring two goals and adding five assists. Rowe has no points in five games this season.

The Mariners have back to back home games this Thursday and Friday night at the Cross Insurance Arena. Manchester is in town on Thursday, December 27th at 7:00 PM. The Mariners also host Worcester on Friday, December 28th at 7:15 PM for a 1-2-3 Friday, Nickelodeon Takeover Night, and First Responders Night. Tickets can be purchased at MarinersOfMaine.com or by calling 207-775-3458. 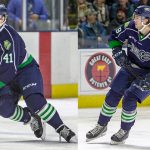