GLENS FALLS, NY – March 30, 2019 – The Mariners led for most of the game, but couldn’t hold onto a 2-0 lead, and fell 4-2 to the Adirondack Thunder on Saturday night at the Cool Insuring Arena. With the loss, the Mariners fell out of a playoff spot in the North Division.

Just over the halfway mark of the first period, the Mariners used the power play to get on the board first. At 10:09, Brycen Martin’s shot from the left point was redirected home by Nick Master – his first professional goal and third point in as many games since joining the Mariners last Sunday. A secondary helper went to Dwyer Tschantz. After a key penalty kill, the Mariners doubled their lead at 18:46 when Zeb Knutson cleaned up a shot from Josh Couturier, making his return from injury. Ryan Ferrill also helped out in front, receiving an assist. Francois Brassard, in his first ECHL start, turned aside all 15 shots in the opening period as the Mariners led, 2-0 through 20 minutes.

The 2-0 lead held up through the late stages of the 2nd period when Jon Edwardh finally beat Francois Brassard, roofing a turnaround shot on a rebound off a Desmond Bergin shot. James Henry also assisted as the Thunder cut the lead to one heading into the third. Brassard racked up 30 saves through two periods.

Just 1:58 into the third period, the Thunder tied it up, scoring during a delayed penalty. James Henry, who finished the game with three assists, slid one across the goal mouth to Cullen Bradshaw on the left side who put one into an empty net. With eight minutes remaining in the third, the Mariners again paid for a turnover attempting to come out of the zone and Henry fed Mike Szmatula for a shot over Brassard’s shoulder. The Mariners got a power play with 1:43 remaining and pulled Brassard to get a 6-on-4 advantage, but lost the faceoff and Blake Thompson rolled a long range dump into the empty net.

Brassard made 43 saves in the tough luck loss. Arthur Brey made 20 stops for the win. Brampton embarrassed Worcester 7-0 at the DCU center to jump ahead of Maine by one point for the fourth and final playoff spot in the North. The Mariners continue to hold games in hand on every team in the division, other than Worcester.

The Mariners and Thunder finish their regular season series tomorrow afternoon in Portland at 3:00 PM. A screening of D2: The Mighty Ducks will immediately follow the game on the video board, free for all fans who purchase tickets to the game. Tickets can be purchased HERE or by calling the Trusted Choice Box Office at 207-775-3458. 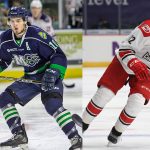