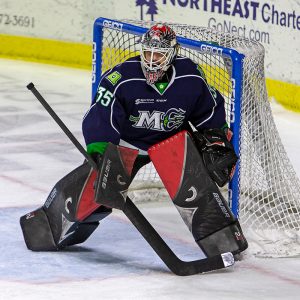 Brassard became the team’s primary netminder in the final two weeks of the 2018-19 season, posting a .917 save percentage in six games.

PORTLAND, ME – August 1, 2019 – The Mariners have locked up their first goaltender for the 2019-20 season, announcing on Thursday the re-signing of Francois Brassard. The rookie netminder was a sixth round draft pick of the Ottawa Senators in 2012 and played six games for the Mariners at the end of the 2018-19 season.

Brassard, a 25-year-old from Gatineau, Quebec, signed with the Mariners on March 20th, shortly after Connor LaCouvee’s recall to the Laval Rocket. He ended up appearing in six of the team’s final seven games, posting a 1-4-0-0 record, a 3.28 GAA, and a .917 SV%. Of his six appearances, four were starts.

“I’m really excited to be back in Portland, especially with the same core of guys as last year,” said Brassard. “I think we had good team chemistry and I’m looking forward to build on what was started in Maine last year.”

Prior to signing in Maine, Brassard had been playing collegiately in Canada for Carleton University (USports), where he posted a 2.02 GAA and .947 SV% in three seasons. It was in the QMJHL, however, that he caught Ottawa’s eye. Brassard played for the Quebec Remparts, Cape Breton Screaming Eagles, and Gatineau Olympiques over a four season junior career. In his final three seasons, Brassard played an average of over 52 games a year, not including playoffs, in which he was involved in two deep President’s Cup runs. In the 2014-15 season, Brassard accomplished a strange but impressive feat, scoring two empty-net goals – one each for Cape Breton and Gatineau.

Although he joined the Mariners from the college ranks, Brassard played five games professionally in the 2015-16 season for the Peoria Rivermen of the SPHL. That season, he went 2-2-0 with a 2.33 GAA and a .903 SV%. His ECHL debut came with the Mariners on March 29th, 2019 at Reading, where he stopped all four shots faced in relief. The following night, Brassard made his first ECHL start, and suffered a tough luck loss at Adirondack, making 43 saves on 46 shots in a 4-2 defeat.

Brassard continued to play well in his next two appearances, but had his first ECHL win elude him until April 5th, when the Mariners got a 4-2 home win over the Worcester Railers, keeping their playoff hopes alive. Brassard stopped 41 of 43 shots. His final appearance came in a losing effort the next night in Manchester, as the Mariners officially saw their postseason aspirations ended by the Monarchs.

The Mariners retained to the ECHL rights to goaltender Connor LaCouvee by issuing him a qualifying offer on July 1st, but LaCouvee signed an AHL deal with the Laval Rocket in June. The Mariners current roster sits at 16 players (nine forwards, six defensemen, one goaltender), with 13 returning from the 2018-19 team. Click here to view the roster. 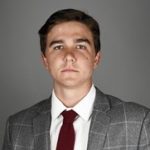 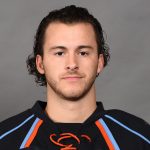