Dec. 4, 2018 – The busy month of December rolls on for the Maine Mariners with three more games this week, fresh off four games in five days coming out of Thanksgiving. Maine went 2-2-0 in the grueling post-Turkey gauntlet, but was less than a minute away from grabbing a point in three of four. Victimized by an unfortunate bounce of a glass stanchion with 34 seconds remaining in the third period, the Mariners fell to Worcester on Sunday afternoon in regulation. They’ll get their shot at revenge with the Railers this coming Sunday, but first it’s a pair of barometer tests against the Adirondack Thunder.

Getting off to a quick start, the Mariners jumped on Reading for an early 2-0 lead in the game’s first nine minutes on goals by Alex Kile and Morgan Adams-Moisan. Kile was in his first action as a Mariner since returning from an AHL loan to the Utica Comets, and Adams-Moisan’s goal – shorthanded – was the first of his professional career. Brandon Halverson did the rest, stopping 35 of 36 Royals shots while Alec Baer and Vince Pedrie (empty-netter) added on. FULL GAME RECAP & HIGHLIGHTS

“Rivalry Night” was true to its name when Morgan Adams-Moisan and Worcester’s Yanick Turcotte dropped the gloves ten seconds into the game. The teams traded first period goals, before the Railers struck early in the 2nd and never looked back. Sean Day brought a two goal deficit back to one late in the 2nd, but Josh Holmstrom’s third period goal was all she wrote. FULL GAME RECAP & HIGHLIGHTS

Saturday, Dec. 1st – MNE: 5, MAN: 2
As the Mariners held their Teddy Bear Toss against the Monarchs a week prior, Manchester was looking to get fur-flying revenge, but Connor LaCouvee had other ideas. LaCouvee held the Monarchs off the board until late in the 3rd, while the Mariners line of Alex Kile, Michael McNicholas, and Morgan Adams-Moisan buried five goals (two each for Kile and Adams-Moisan). Manchester’s two goals in the third made things briefly interesting until Kile’s empty netter sealed the deal. FULL GAME RECAP & HIGHLIGHTS

Sunday, Dec. 2nd – MNE: 2, WOR: 3
Ty Ronning opened the scoring late in the first, and after a pair of Railers goals, Ryan Ferrill’s shorthanded breakaway tally gave the Mariners the ECHL lead in shorthanded goals. Tied 2-2 into the third, the week clearly caught up to the Mariners’ legs, who leaned heavily on Halverson, facing 20 shots in the third. The 20th and final one, ended up on Tyler Barnes stick alone in front of the Mariners’ netminder, who had no chance, and Maine had to swallow a tough regulation defeat. FULL GAME RECAP

-Morgan Adams-Moisan scored the first four goals of his pro career this week, the first coming shorthanded on Wednesday against Reading, and the final two coming in Friday’s road victory in Manchester

-The Mariners now lead the ECHL with 8 shorthanded goals, and have scored them all since Nov. 7th (11 games)

The week begins with two big battles against the 2nd place Adirondack Thunder. The Mariners are currently four points behind Adirondack with two games in hand. The two teams have no played since October 26th. Friday night is another 1-2-3 Friday: $1 hotdogs, $2 popcorn, and $3 Bud Light Drafts through the start of the 2nd period. Worcester comes to town Sunday afternoon for a 3:00 PM. The Mariners are collecting non-perishable items for Preble Street during the next three home games. (Friday, December 14th in addition to the two listed above)

Mariners Holiday Packs are on sale! There are three options to choose from: Blizzard, Flurry, and Snowflake. The deadline to order for holiday shipping is Monday, December 10th. Fans can call the Mariners business office at 833-GO-MAINE to purchase. 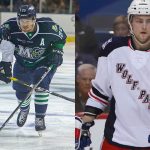