WORCESTER, MA – December 2, 2018 – With 34.4 seconds remaining in regulation, Zach Tolkinen’s attempted clear around the glass took an unfortunate bounce and landed right on the stick of Tyler Barnes, alone in front of Brandon Halverson. Barnes beat Halverson glove side to break a 2-2 tie and send the Mariners home from the DCU Center without a point on Sunday afternoon.

The game was tied for virtually the entire afternoon, as each team followed the other’s brief lead with quick answers. Ty Ronning opened the scoring when Riley Bourbonnais won a faceoff into the slot for Ronning to one-time past Mitch Gillum at 15:42 of the first. At 17:03, Ryan Hitchcock finished a Tyler Barnes feed on the right wing off a 3-on-1 to tie it up.

Worcester went ahead at 9:11 of the 2nd when Matt Gaudreau beat Halverson with a wrister from the bottom of the left-wing circle. That lead would also be short-lived, however, as the Mariners answered at 10:43 with their league-leading eight shorthanded goal. Ryan Ferrill picked up the free puck in the neutral zone and skated in on Gillum, beating his glove with a top-shelf shot to tie the game at two. Ferrill later fought Worcester’s Alex Vanier, after a questionable hit on Scott Savage. It was 2-2 after two.

The Mariners, playing their third game in three days, and fourth in five, battled through the third on tired legs trying to steal a point, but on the 20th shot of the period and 45th of the game, Barnes took advantage of his good fortune.

Halverson stopped 42 for the tough luck loss. Gillum finished with 31 saves on 33 shots for his third win in a row.

The Mariners will travel to Glens Falls, NY for a Wednesday night battle with the Adirondack Thunder at 7:00 PM. They’ll return home to face the Thunder on Friday, before hosting Worcester again on Sunday afternoon. Tickets to all home games can be purchased at MarinersOfMaine.com or by calling 207-775-3458. 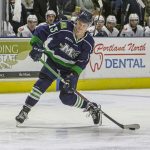