MAINE MARINERS HOCKEY IN THE NEWS 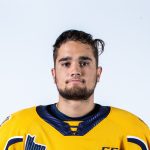 The Maine Mariners Hockey are a professional ice hockey team in the ECHL that began play in the 2018–19 season. Based in Portland, Maine, the team plays their home games at the Cross Insurance Arena. The team participate in the North Division of the Eastern Conference.

Began in 1988-89 with five teams in four states, the ECHL has grown into a coast-to-coast league with 26 teams in 21 states and two Canadian provinces as it celebrates its 31st season in 2018-19. There have been 661 players who have started their career in the ECHL have gone on to play in the National Hockey League, including 19 who made their NHL debuts in the 2018-19 season.

Cross Insurance Arena, which is owned by Cumberland County and professionally managed by Spectra, is a 6.200 seat arena that opened in 1977 and renovated in 2012. The arena hosts the ECHL’s  Maine Mariners , minor league affiliate to the New York Rangers.  The Cross Insurance Arena also hosts the MPA Class AA state championships.