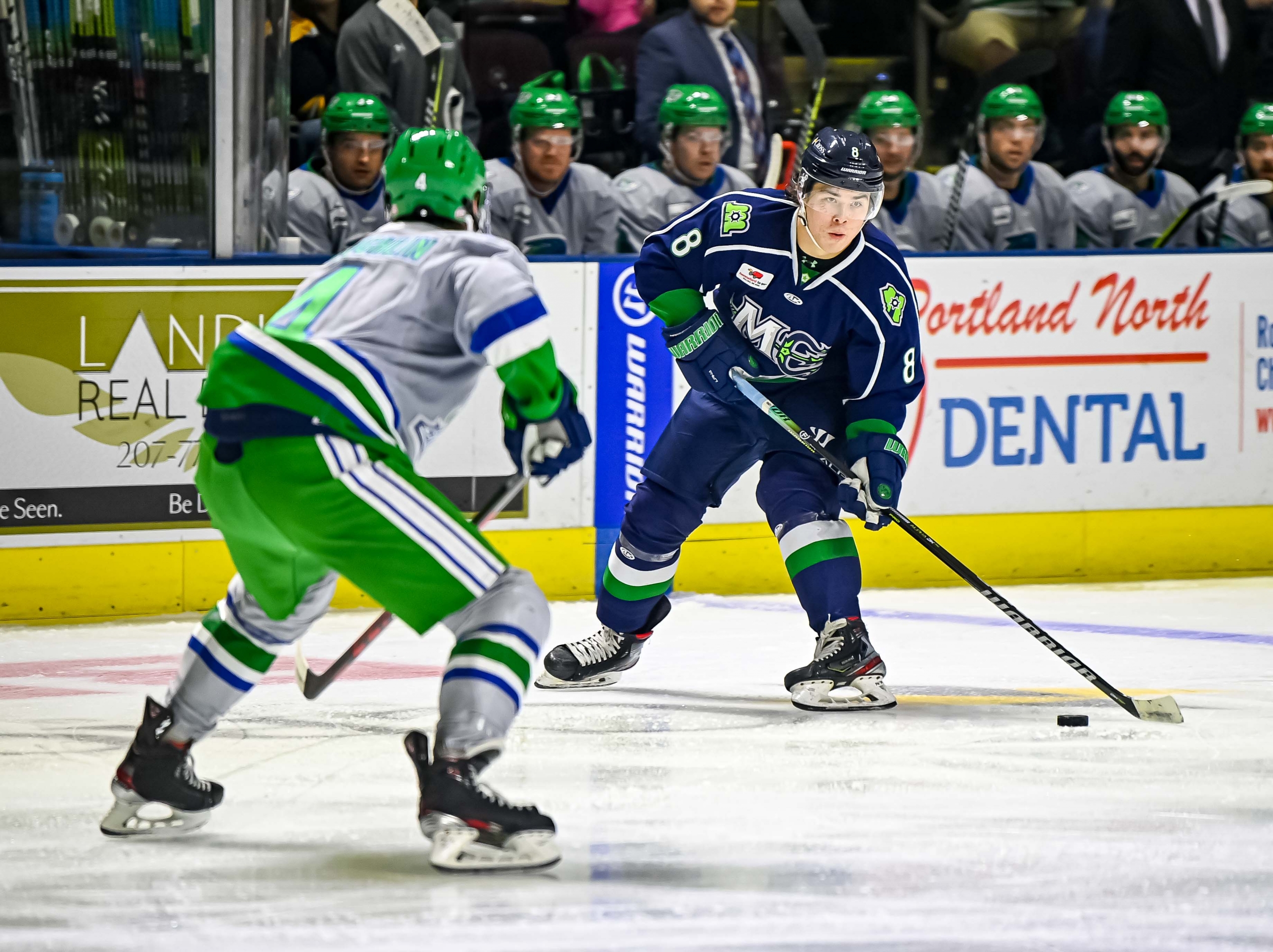 PORTLAND, ME – November 5, 2021 – For the second straight Friday, the Mariners struggled to find the net on home ice, as they dropped a 4-1 decision to the Florida Everblades at the Cross Insurance Arena. Lewis Zerter-Gossage scored the lone Mariners goal midway through the third period.

In the first ever meeting between the two teams, the visiting Everblades got off to a quick start and broke the scoreless tie at 3:25 of the first period. Florida’s Blake Winiecki shuck a shot from the right circle past the short-side of Mariners goaltender Jeremy Brodeur to make it 1-0 Blades. Florida held a 14-9 shot advantage and the one goal lead after 20 minutes.

Early in the 2nd, the Mariners had a golden chance to tie the game when forward Justin Brazeau was awarded a penalty shot. Brazeau fired wide, however, keeping the Everblades up 1-0, a lead that they held heading to the third.

The Mariners were robbed by Florida netminder Cam Johnson on a couple of great scoring chances in the opening minutes of the third. Then, at 4:25, Dylan Vander Esch doubled the Everblades lead when he deposited a rebound from a Joe Pendeza shot to make it 2-0. A little over three minutes later, Alex Aleardi showed good patience, and held onto a puck in the offensive zone before picking a spot and slapping a shot past Brodeur. Finally, the Mariners got on the board at 11:25, Zerter-Gossage driving the net and cleaning up a combination play from Brendan Robbins and Andrew Romano.

The Mariners pulled the goaltender with a little over two minutes remaining and Florida’s John McCarron quickly found the empty net to put the game away. Johnson made 23 saves to earn his first win of the season while Brodeur stopped 29 of 32 to take his first loss.

The Mariners, proud ECHL affiliates of the Boston Bruins, complete their homestand with a pair of game next weekend against the Trois-Rivieres Lions on Friday, November 12th and Sunday, November 14th. Friday is the annual “Military Appreciation Night,” presented by Martin’s Point Health Care and features a USA cap giveaway, sponsored by Bath Iron Works. Game time is 7:15 PM. On Sunday, it’s a Thanksgiving Food Drive presented by News Center Maine, as the Mariners collected non-perishable Thanksgiving food items for Good Shepherd Food Bank. Individual tickets can be purchased online at MarinersOfMaine.com or by visiting the Trusted Choice Box Office inside the Cross Insurance Arena.