PORTLAND, ME – October 15, 2021 – Following his record-breaking performance on Friday night, Mariners forward Lewis Zerter-Gossage has been loaned to the American Hockey League’s Tucson Roadrunners. Zerter-Gossage has 30 career AHL games under his belt, all with the Hartford Wolf Pack.

In the Mariners 8-7 overtime loss to Trois-Rivieres on Friday night, Zerter-Gossage turned in a record-setting performance. He scored five goals and totaled six points, both setting Mariners single-game franchise marks. He became the 33rd player in ECHL history to score five goals in a game. In the early going, Zerter-Gossage is the Mariners team leader in points (12) and goals (5).

During Zerter-Gossage’s first stint with the Mariners in 2019-20, he was under contract with the Hartford Wolf Pack. He appeared in 25 games for the Wolf Pack that season, plus an additional five the prior season. Zerter-Gossage was traded from Hartford to the Lehigh Valley Phantoms in February of 2020, but did not appear in a game for the Phantoms, instead playing the remainder of that season for the Reading Royals.

Zerter-Gossage is 26-years-old and hails from Montreal, QC. He is a former captain of Harvard University’s men’s hockey program, graduating in 2019.

The Mariners will play four games in Florida this week – three at Jacksonville and one at Orlando. They’ll return home for a pair of games around Thanksgiving on November 24th and 26th. They host the Worcester Railers on Wednesday the 24th at 7:00 PM as the VIP Rivalry Cup continues. The Newfoundland Growlers come to town on the 26th for a 7:15 PM faceoff and Marvel Super Hero™ Night, which will feature Black Panther specialty jerseys. Individual tickets can be purchased online at MarinersOfMaine.com or by visiting the Trusted Choice Box Office inside the Cross Insurance Arena. 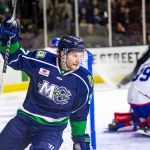 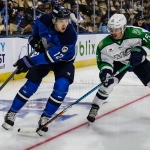