PORTLAND, ME – October 29, 2019 – The Hartford Wolf Pack, AHL affiliate of the Mariners, have recalled forward Lewis Zerter-Gossage and defenseman Jeff Taylor. Both players are under contract with the Wolf Pack.

Zerter-Gossage, 24, signed with the Wolf Pack last spring after finishing his career as captain of Harvard University. In five games for Hartford, he scored two goals. Zerter Gossage registered three assists over the weekend vs. Newfoundland – the first three of his ECHL career. The 6’2, 190 pound forward is a native of Montreal, QC.

Taylor is a defenseman who has split his pro career between the AHL and ECHL. Drafted by the Penguins in 2014, he played for their AHL affiliate, the Wilkes-Barre/Scranton Penguins from 2016-18. He also played 28 games with the ECHL’s Wheeling Nailers, and then assistant coach Riley Armstrong, in 2017-18. Taylor signed as a free agent with the Wolf Pack this past offseason. The Albany, NY native is 25 years old. He’s played six of the seven games this season for Maine.

The Mariners are home Saturday at 6:00 PM for their third straight matchup with the Newfoundland Growlers. It’s Marvel Super Hero™ Night, featuring special “The Hulk” themed jerseys. There will also be a postgame skate with the team. It’s a “Family Four Pack” game, as it is all Saturday and Sunday games at the Cross Insurance Arena. Families of four can get four tickets, four food and drink vouchers, and four Mariners can koozies for as low as $80. Family four packs must be purchased in advance. For more information and to purchase tickets, CLICK HERE, call 833-GO-MAINE, or visit the Mariners front office at 94 Free St. in Portland. 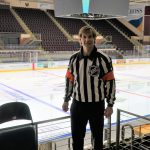