PORTLAND, ME – February 19, 2019 – The Hartford Wolf Pack (AHL) returned defenseman Derek Pratt from loan to the Maine Mariners on Tuesday. Pratt had been summoned to Hartford on Thursday, which at the time left the Mariners with just six defensemen on the roster. Now, with the recent acquisition of Blake Kessel and Pratt’s return, the Mariners are eight defensemen deep.

Pratt, a 24-year-old from Mount Hermon, MA was in training camp with Hartford and was on the roster for the Rangers at the annual Traverse City Prospects Tournament in September, but has played exclusively for the Mariners in the regular season. In 44 games with Maine, Pratt has two goals and 11 assists. In his last action with the Mariners, he scored the game-tying goal with two minutes remaining in regulation to help the Mariners pull off an improbable comeback win over Worcester on February 13th.

Pratt did not see game action with the Wolf Pack while on loan.

The Mariners are in the midst of a five game road trip, playing tomorrow night in Reading at 7:00 PM. They will then visit Adirondack and Manchester over the weekend. The next home game is Sunday, February 24th at 3:00 PM against the Worcester Railers. A full team autograph session will follow the game. Single game tickets can be purchased HERE or by visiting or calling the Trusted Choice Box Office: 207-775-3458. 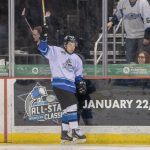