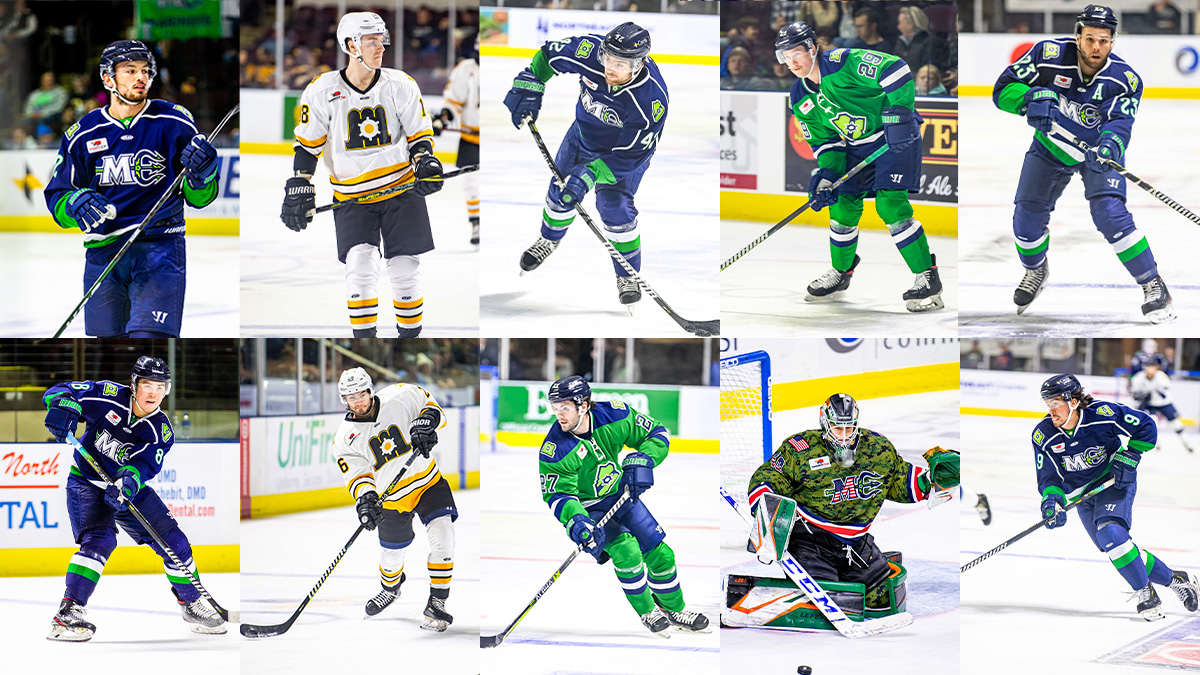 PORTLAND, ME – January 14, 2022 – With the Mariners enjoying an extended All-Star break, ten players will have the chance to suit up for American Hockey League teams this weekend. Five different AHL clubs will receive players from the Mariners, who have now advanced a total of 21 players this season.

The Mariners AHL affiliate, the Providence Bruins, have recalled forward Ian McKinnon and defenseman Andrew Peski, both playing on AHL contracts. In addition, defenseman Zach Malatesta has been loaned to Providence. Malatesta, who was acquired in a trade from Indy on December 30th, has already registered seven assists in six games with the Mariners. The fifth-year pro has played nearly 250 ECHL games and will be getting his second AHL look, after four games with the Hersey Bears last season.

The Springfield Thunderbirds will receive defensemen Michael Kim and Nate Kallen, plus forward Patrick Shea and goaltender Zach Bouthillier. Kim was loaned to the Thunderbirds on November 23rd and subsequently signed a two-way AHL-ECHL deal with them, but has been returned to the Mariners twice, including for Wednesday’s game at Worcester. He’s appeared in 12 games for Springfield this season and 13 for Maine. Kallen will have the chance to make his AHL debut after posting seven points in 16 games for the Mariners this season. Although Kallen originally joined the Mariners at the end of the 2019-20 season, he’s still a rookie, having played just seven ECHL games prior to this year. Shea, a University of Maine alumnus, is also a rookie, making his professional debut with the Mariners this season. A seventh-round draft choice of the Florida Panthers in 2015, Shea has six points (four goals, two assists) in 24 games. Bouthillier, a first-year pro as well, has appeared in seven games for the Mariners this season, with a 2-2-1 record, a 3.60 goals-against average, and a .898 save percentage. He was a seventh-round pick of the Toronto Maple Leafs in 2018.

Mariners leading scorer Pascal Laberge has been loaned to the Wilkes-Barre/Scranton Penguins. A former second round pick of the Philadelphia Flyers in 2016, Laberge is having a career year in Maine, with 29 points (13 goals, 16 assists) in 24 games. The forward has prior AHL experience with Lehigh Valley, while in the Flyers organization.

Speaking of the Lehigh Valley Phantoms, forward Alex Kile has signed a two-way AHL-ECHL deal with them, meaning his AHL rights will remain with the Phantoms through the end of the season, while the Mariners retain his ECHL rights. Kile has been on fire since coming off injured reserve on December 29th, putting up 12 points (five goals, seven assists) in seven games. In addition to 201 career ECHL games, Kile has played 51 games in the AHL, with Rochester, Utica, Hartford, and Laval.

Last weekend, following his two-assist game at Adirondack, rookie forward Keltie Jeri-Leon was loaned to the Abbotsford Canucks in his home province of British Columbia. Jeri-Leon has been one of the top rookie performers on the Mariners roster this season, with five goals and eight assists in 23 games. He’s also appeared in two games with Providence, scoring his first AHL goal on December 12th.

The Mariners have now had a total of 21 players earn AHL call-ups this season, continuing to build a reputation of an organization that affords players the opportunity to move up the ladder.

“We are very excited for our players to get a chance to get AHL opportunities at this time of the year,” said Mariners Head Coach Ben Guite. “Maine is a great place to play with a phenomenal fan base. It’s also a place where players get developed and get a chance to advance their pro careers.”

The Mariners have eight days between games due to an originally scheduled trip to Newfoundland being postponed. The ECHL takes its All-Star break next week.

The Mariners, proud affiliates of the Boston Bruins, return to play on Friday, January 21st at home against the Orlando Solar Bears at 7:15 PM. It’s Women in Sports night, featuring a pre-game panel, highlighted by former U.S. Olympian and current President of the Boston Pride, Colleen Coyne. It’s also a 1-2-3 Friday: $1 popcorn, $2 hot dogs, and $3 Bud Light Drafts through the start of the 2nd period. The game is presented by Kit NA Brewing. The Mariners have back-to-back “3Kends” to finish January, hosting games on each of the final two Fridays, Saturdays, and Sundays of January. Individual tickets for all games can be purchased online at MarinersOfMaine.com/tickets or by visiting the Trusted Choice Box Office inside the Cross Insurance Arena.