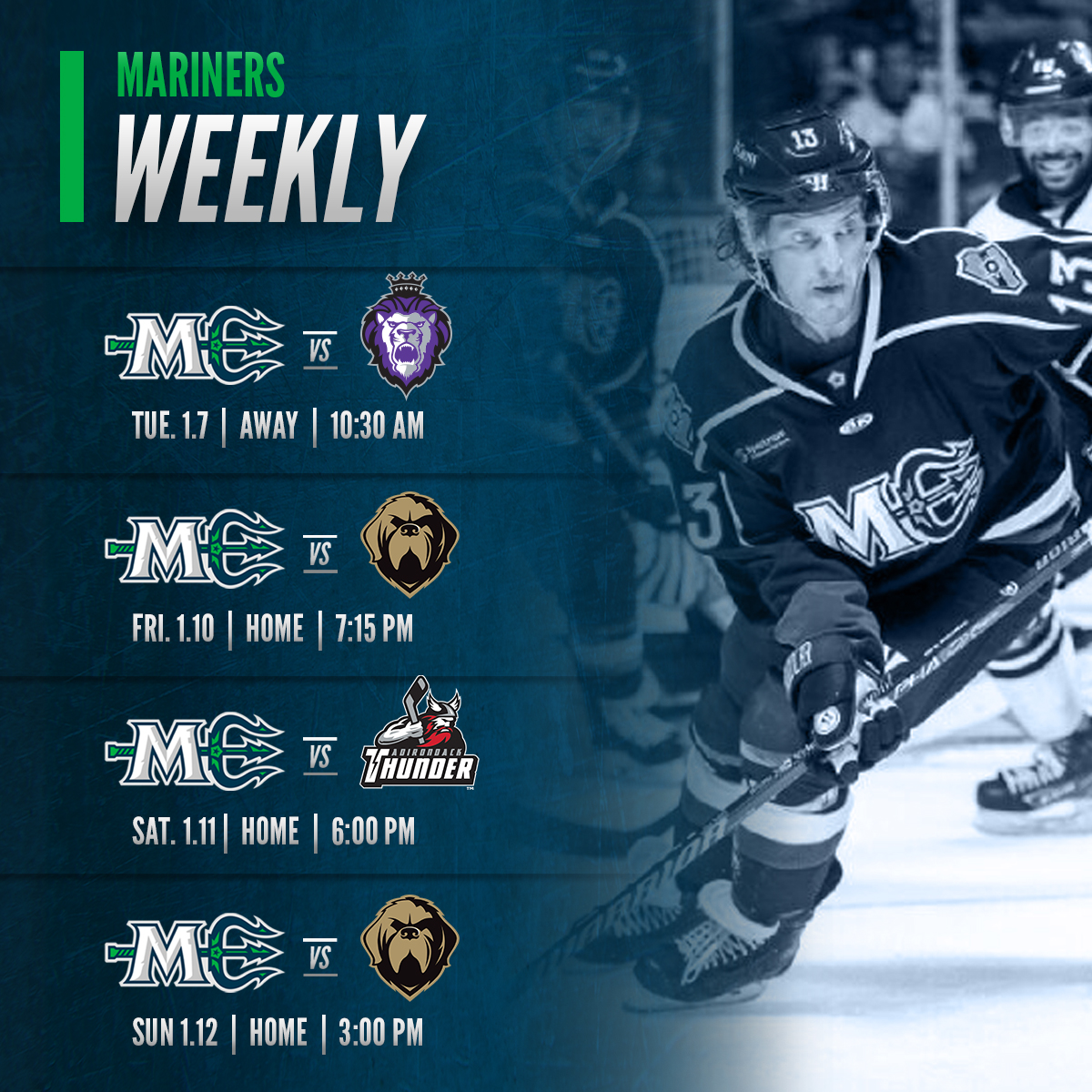 Jan. 6, 2020 – With 31 games played, the Mariners are tied for the fewest in the ECHL as they enter the swing of 2020. They won’t hold that distinction for much longer, with a January schedule that will have them playing virtually a game every other day. A start of an eight game in ten day stretch begins this weekend with the first “3kend” of the season – three in three – all at home. The Mariners have alternated win/loss in their last five games, keeping them in a steady 4th/5th place swap with Adirondack, but holding seven games in hand and four games in the win column on the Thunder, who is one of their three opponents this week. The “Winning 3kend” will give Mariners fans opportunities to win prizes and experiences all weekend long at the Cross Insurance Arena.

On the final day of 2019, the Mariners skated into Reading and grabbed a 1-0 lead when Taylor Cammarata netted a power play goal in the opening period. The Royals scored twice in the late stages of the first to take a 2-1 lead and built it to 3-1 before Ted Hart closed the gap midway through the second. The turning point came when the Mariners failed to score with a 5-on-3 and Reading’s Steven Swavely scored straight out of the penalty box. Newly signed forward Eddie Matsushima got his first ECHL goal in his Maine debut. FULL GAME RECAP

Terrence Wallin’s hat trick fueled the Mariners to a weekend-opening win in their first ever meeting with the Jacksonville Icemen. Wallin first goal gave the Mariners the 1-0 lead, and he later tied the game at two in the 2nd. He finished his first professional three goal game to give the Mariners the lead in the third before Ty Ronning’s insurance tally moments later. Connor LaCouvee earned his tenth win of the season between the pipes. FULL GAME RECAP & HIGHLIGHTS

Jacksonville took leads of 1-0, 2-1, and 3-2, holding onto the third one when Alexis D’Aoust’s third period power play goal broke the 2-2 tie early in the 3rd. Defensemen Zach Tolkinen (PPG) and Brandon Crawley scored the Mariners goals – Crawley’s was his first as a Mariner. FULL GAME RECAP & HIGHLIGHTS

Tuesday’s game is the lone morning game of the season for the Mariners – a 10:30 AM start in Reading. A free radio broadcast is available at MarinersOfMaine.com/listen and fans can also subscribe to watch in HD on ECHL.tv – the “AWAY” option will carry the Mariners broadcast network.

The weekend series at the Cross Insurance Arena is “Winning 3Kend” presented by Three Dollar Deweys. At each game, one lucky fan will get the chance to win $10,000. Other prizes and experiences will be awarded to fans throughout the weekend as well. Friday’s game begins at 7:15 PM and is a 1-2-3 Friday: $1 Aquafina, $2 Pepsi Products, $3 Bud Light Drafts through the start of the 2nd period. Saturday’s game will feature a Mariners tumbler giveaway to the first 2,000 fans courtesy of The Holy Donut. There will also be a collection for the Animal Refuge League of Greater Portland (Beacon’s Buddies presented by Evergreen Credit Union). Fans who bring two pet items to the promotions port will receive a ticket to a future weekday game. Saturday’s game begins at 6 PM. Sunday afternoon, a 3 PM game is “Kids Run the Show.” Kids ages 7-12 who entered to win various experiences within the game presentation will help out with in-game hosting, radio broadcast, promo team, and more. Family four packs are available for both Saturday and Sunday’s games – featuring four tickets, four food and drink vouchers, and four Mariners can koozies for as low as $80.

The Mariners Coach’s Show is back this Thursday, January 9th at Three Dollar Dewey’s at 241 Commercial St. in downtown Portland. The show airs from 6-7 PM and also broadcasts live on MarinersOfMaine.com/listen. Captain Zach Tolkinen and a Mariners coach will be on the show this week. After the show, a guest will give away four ice row tickets to a Mariners home game.

Looking ahead:
The Mariners finish their homestand with a Tuesday night game against the Worcester Railers on January 14th at 7 PM. After hitting the road for four, they’re back on Friday, January 24th for Star Wars Night, featuring a T-Shirt giveaway to the first 2,000 fans courtesy of Unifirst. The Mariners then open the month of February with six home games in a row. The full promotional schedule can be found here.