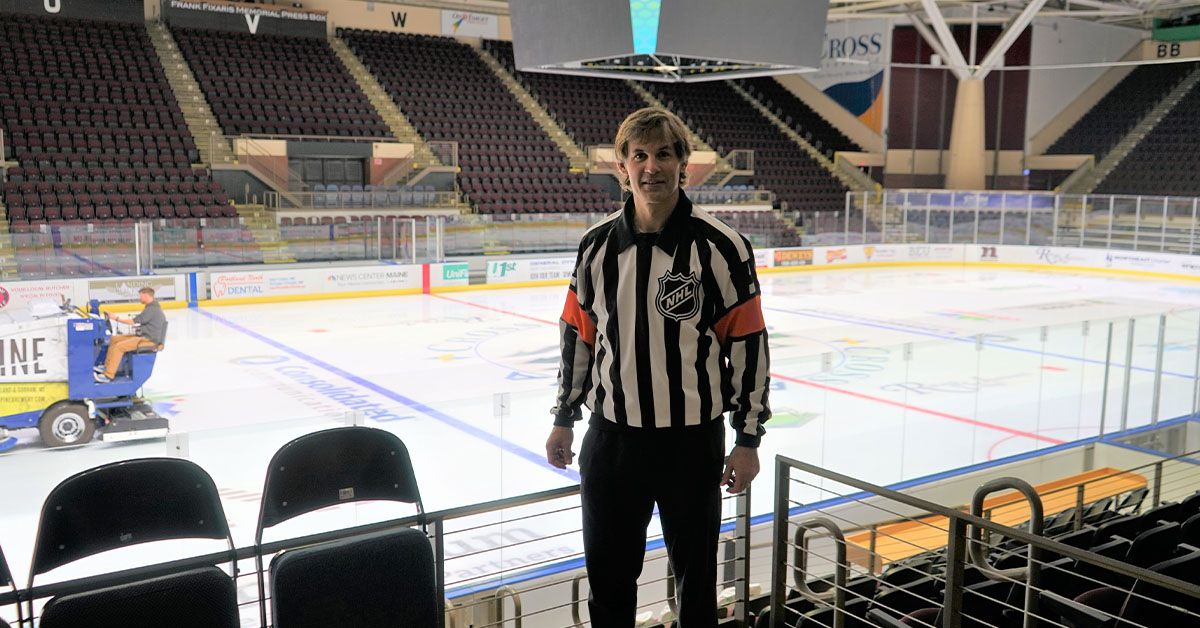 Wes McCauley Appreciation Night is set for Friday, Nov. 15th at the Cross Insurance Arena when the Mariners host the Brampton Beast at 7:15 PM

PORTLAND, ME – October 31, 2019 – As part of “Wes McCauley Appreciation Night” on November 15th, the Mariners will auction off two McCauley game worn NHL referee jerseys, with 100% of the proceeds benefiting the Portland Hockey Trust. The Mariners host the Brampton Beast at 7:15 PM as they honor the local NHL referee. Bidding for the jerseys will begin Monday, November 11th via Handbid and run through the start of the 3rd period on November 15th.

“Wes McCauley is a great Mainer,” said Mariners V.P. of Business Operations Adam Goldberg. “We are thankful that he is putting the two jerseys up for auction and he could not have picked a more suitable beneficiary in the Portland Hockey Trust. We are grateful for Wes’ desire to continue the growth of this great sport here in Portland.”

McCauley is a South Portland resident and is considered the NHL’s best referee. He’s been chosen to work every Stanley Cup Final since 2013, missing last season’s series due to injury. He was voted the top referee in the NHL by the NHL Players Association in the spring of 2018 and was inducted into the Maine Sports Hall of Fame this past May. He’s best known for his humorous penalty calls and “mic’d up” interactions with players.

“My family and I are very honored and humbled that the Maine Mariners would have a night in my honor,” McCauley said. “Our family has grown up in Maine and have been lucky to be a part of this great hockey community. We are happy to see that all proceeds from the auction will benefit the Portland Hockey Trust.”

McCauley has worked in all three levels of affiliated pro hockey, following in the footsteps of his father John, who was the NHL’s Director of Officiating from 1986-89. Wes played five seasons professionally including a year in the ECHL with the Knoxville Cherokees. He was an eighth round draft pick of the Detroit Red Wings in 1990.

McCauley, who worked his 1,000th NHL game last season, lives in South Portland with his wife Bethany – a native of the area, and their three children.

After he drops the ceremonial puck on November 15th, fans will be able to get autographs from McCauley in the concourse during the first intermission. There will also be a video compilation on the scoreboard showing some of McCauley’s best “mic’d up moments.” All fans are encouraged to wear officiating stripes to honor Wes. He will finish his night by joining Mariners broadcaster Michael Keeley for commentary in the third period of the webcast on Mixlr and ECHL.tv.

Handbid, which is the official Mobile Auction App of the ECHL, will be used for the McCauley jersey auction as well as all specialty jersey auctions throughout the season. Other items and fan experiences will be available to bid on through Handbid as well. Fans are encouraged to download the Handbid App on their smartphones in the Apple or Google Play stores, but it can also be accessed on a web browser at https://events.handbid.com/.

The Mariners are in action this Saturday when Newfoundland returns for Marvel Super Hero™ Night at 6:00 PM. The Mariners will wear The Hulk specialty jerseys and there will also be a postgame skate with the team. Fans can bid on the specialty jerseys using the Handbid App from the start of the game up to ten minutes after the final horn. It’s also a “Family Four Pack” game: families of four can get four tickets, four food and drink vouchers, and four Mariners can koozies for as low as $80. Family four packs must be purchased in advance. For more information and to purchase tickets, CLICK HERE, call 833-GO-MAINE, or visit the Mariners front office at 94 Free St. in Portland.

MARINERS RALLY AROUND MCCOLLUM TO TOP NEWFOUNDLAND
Scroll to top