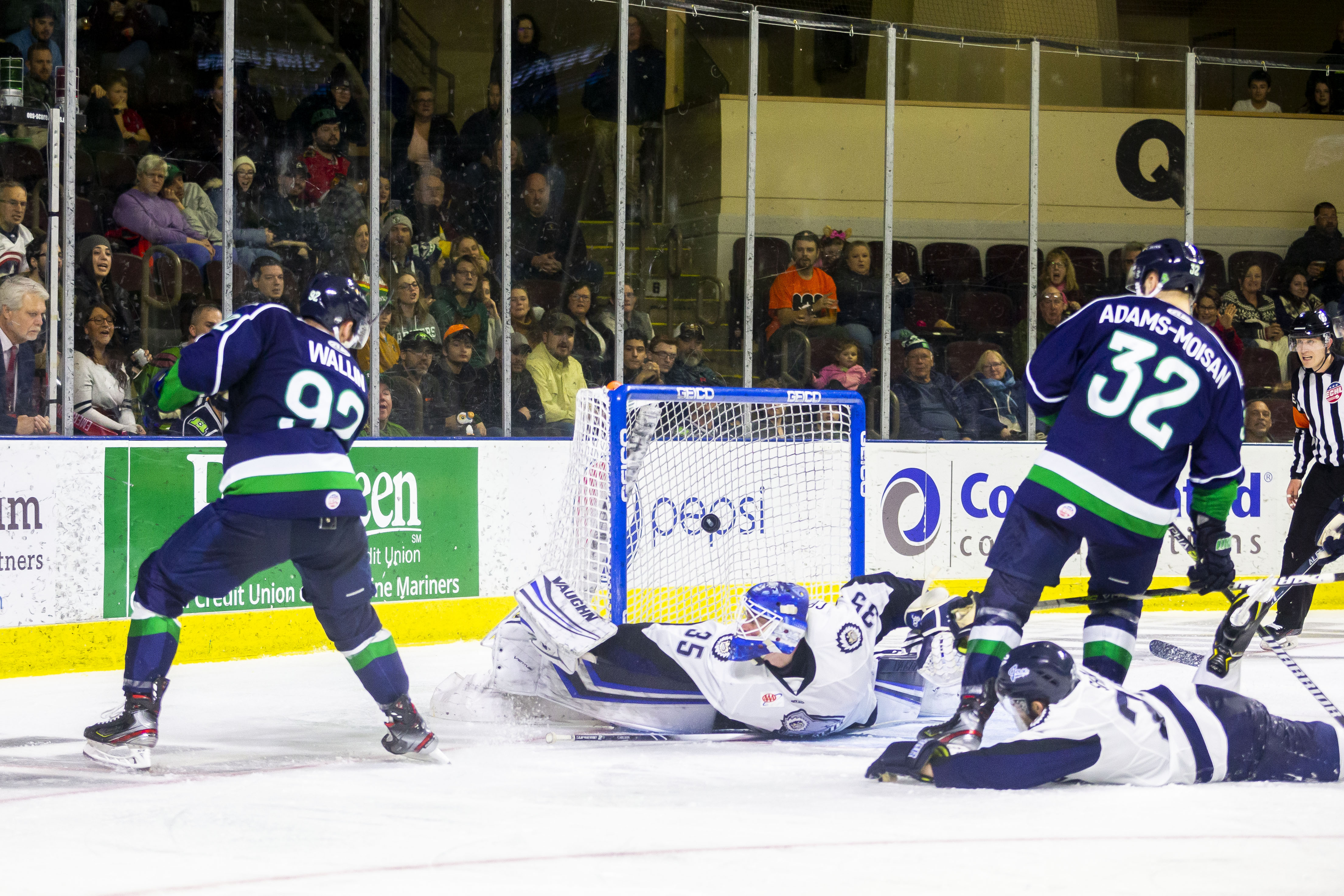 PORTLAND, ME – January 3, 2020 – Terrence Wallin has been a leader on and off the ice for the Mariners since arriving in Maine late in the offseason of 2018. On Friday, he recorded a hat trick, including his team leading 5th game-winning goal as the Mariners topped the Jacksonville Icemen, 5-3 in a back and forth affair at the Cross Insurance Arena.

“Honestly we just got pucks deep and I got to the crease a couple of times and I got lucky to put it in a few times,” said a modest Wallin after the game. Wallin added to his team-leading goal total which now sits at 16.

Each team found the net in the first period, with goals coming 1:08 apart. The Mariners struck first at 12:12 when Taylor Cammarata skated in on a partial breakaway, turned out and fed Ryan Culkin, who located Terrence Wallin trailing. Wallin ripped a shot off the post and behind IceMen goaltender Adam Carlson for his team-leading 14th. Jacksonville had the quick answer when Craig Martin’s shot from the slot beat Connor LaCouvee’s glove.

The second period was a back-and-forth affair, with Jacksonville jumping to a 2-1 lead at 6:49. Kyle Shiplo’s shot from the blue line evaded LaCouvee to give the IceMen their first advantage of the game. At 7:47, Wallin struck again to tie it up after John Furgele and Ty Ronning shots caused rebounds off of Carlson. Wallin was sitting in the crease to Carlson’s right to cash his second goal of the night. Jacksonville took the lead back at 15:58 when Adam Dauda’s redirect went between LaCouvee’s pads. The shot was taken by Pierre-Luc Mercier for his second assist of the game. IceMen defenseman Kyle Shapiro was called for cross-checking in the final minute of the period and the Mariners cashed in to tie it up at three. Sean Day one-timed a pass from Michael McNicholas off two Jacksonville bodies and in for his first goal of the season. Each team fired 11 shots in the middle frame.

The Mariners were dominant in the third, ultimately outshooting Jacksonville 19-8, and broke the 3-3 tie when Wallin finished his hat trick at the 6:52 mark. Just after a power play expired, Alex Kile’s shot deflected off Morgan Adams-Moisan and the rebound was deposited by Wallin. It was the third Mariners hat trick this season – the previous two by Jake Elmer. Less than a minute later, the Mariners added insurance. Dillan Fox, in his first game back off an AHL loan to Hartford, circled the net with the puck and sent it to the front, deflecting off Kile before Ty Ronning finished it at the bottom of the left-wing circle. At the 8:40 mark, Jacksonville appeared to cut the deficit back to one when a shot from the corner to LaCouvee’s right by Chase Lang sat around his pad and appeared to be poked in. A lengthy review by the officials determined no goal, and no further scoring unfolded in the game.

“The first and second were a little sluggish for us and we were lucky to come out of it 3-3,” said Wallin. “Our third period we really locked them down and scored some timely goals.”

The 19 third period shots and 39 in the game were each a season high mark for the Mariners. LaCouvee made 24 saves to earn his 10th win. Carlson turned aside 34. The Mariners jumped back into fourth place in the North Division with the win, pulling within five points of both Brampton and Reading for 2nd and 3rd.

The Mariners and Icemen will play an encore performance tomorrow night, the second of two games in a doubleheader at the Cross Insurance arena for “Hockey Day in Maine.” The University of Maine men’s hockey team will host the University of Nebraska-Omaha at noon to kick off the festivities. The Mariners and Jacksonville follow with a game at 6 PM. It’s also “Witchcraft and Wizardry Night.”