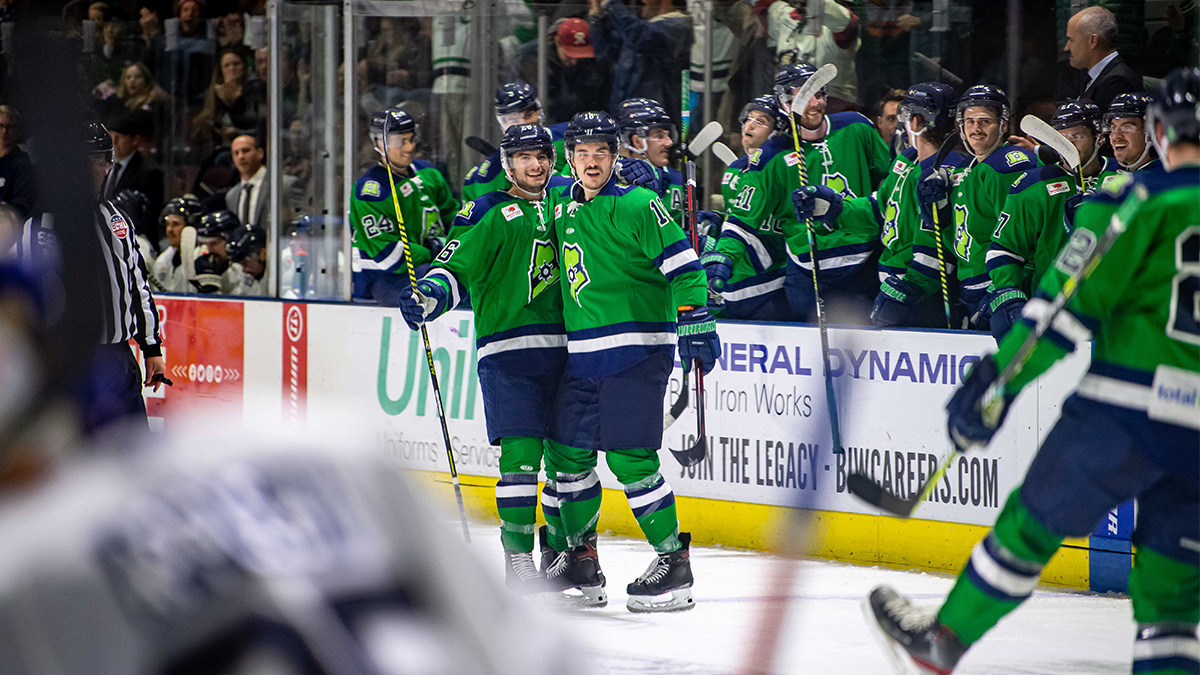 PORTLAND, ME – November 24, 2021 – The Maine Mariners received major reinforcements to their forward lines on Tuesday, when Alex-Olivier Voyer and Eduards Tralmaks were assigned to Maine from AHL Providence. On Wednesday night, both additions paid off in a huge way, as Voyer and Tralmaks each registered four points in a 4-2 come-from-behind win over the Worcester Railers at the Cross Insurance Arena.

The Railers grabbed the edge in the first period with a pair of goals 26 seconds apart at 7:45 and 8:11. Anthony Repaci took a pass from Ross Olsson from below the goal line and beat Jeremy Brodeur for the game’s opening goal, while Drew Callin doubled the Railers lead shortly after, finishing a feed from Liam Coughlin. The Mariners were stifled by Railers netminder Ken Appleby who made 15 first period saves.

It remained a 2-0 Worcester lead until late in the 2nd period when the Mariners power play went to work. Tralmaks spotted Voyer from below the goal line, finally getting the Mariners on the board at 15:55 of the middle frame. Conner Bleackley picked up the secondary assist for his first point of the season. Less than a minute later, the Railers gave the Mariners another chance with the man advantage, and Voyer struck again, this time with a one-timer from above the left-wing circle. The Mariners took momentum into the locker room in a 2-2 tie.

As each team fought through a third penalty kill, the game remained squared at two until just under four minutes remaining. The Tralmaks-to-Voyer duo converted again with 3:37 remaining, with Voyer completing the hat trick – already the third of the season for the Mariners in just their 7th home game. With Worcester net empty in the final minute, Voyer sprung Tralmaks on a breakaway to seal the 4-2 victory.

Despite having five career AHL goals, Voyer’s first goal of the night was his first in the ECHL. His natural hat trick was reminiscent of Ty Ronning’s Mariners debut – exactly three years ago to the day, against Manchester. Between the pipes, Brodeur made 27 saves on 29 Railers shots to earn his fifth win. Appleby stopped 39 of 42 in the losing effort. The Mariners power play is now clipping at 52% on home ice, going 11/21 through the first seven home contests.

The Mariners (6-4-2-0), are home again on Friday, hosting the Newfoundland Growlers at 7:15 PM. It’s Marvel Super Hero™ Night, which will feature Black Panther specialty jerseys (auctioned via Handbid) and a Marvel poster giveaway to the first 1,000 fans. It’s also a 1-2-3 Friday: $1 popcorn, $2 hot dogs, and $3 Bud Light Drafts through the start of the 2nd period. Individual tickets can be purchased online at MarinersOfMaine.com or by visiting the Trusted Choice Box Office inside the Cross Insurance Arena.

MARINERS DOUBLED UP BY GROWLERS, 4-2
Scroll to top