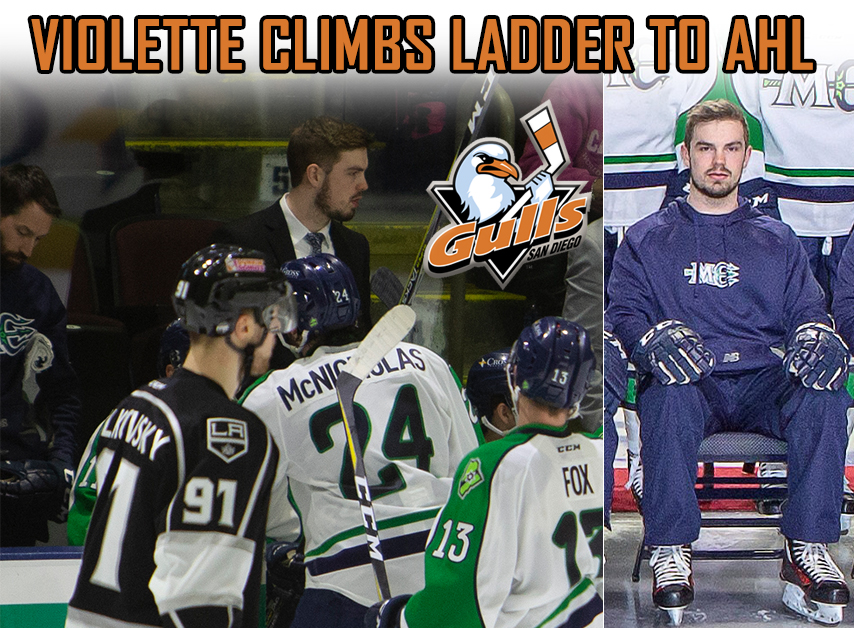 PORTLAND, ME – September 4, 2019 – Austin Violette has been hired by the AHL’s San Diego Gulls as their Video Coordinator, the Mariners announced on Wednesday. Violette began the 2018-19 season as a volunteer coaching assistant for the Mariners and worked his way up to a video coach/assistant coach role by season’s end. He becomes the second member of the Mariners hockey operations staff to rise to the AHL this offseason, joining former equipment manager Mark Riepe.

“Obviously the goal for everyone in the league is to move up as fast as you can, I just didn’t think it would be this fast for me,” said Violette. “I understand how fortunate I am to receive this opportunity from the San Diego Gulls and I also know there are expectations that are set for me and I am going to have to work to exceed those. Last year I realized that this is what I wanted to make a career out of and this is more than a great step in the right direction.”

Violette, 21, is a Gorham native who grew up playing hockey in New Hampshire, with aspirations of a college and professional career. After time in junior hockey with the Northern Cyclones (Hudson, NH) and Seacoast Spartans Prep (Exteter, NH), Violette’s playing career was cut short due to concussion and other head-related injuries.

Along the way, Austin met Riley Armstrong, with whom he kept in touch, and was offered a golden opportunity to be a part of the return of professional hockey to Maine in 2018-19. His initial role was to mark and clip game film during Mariners home games, but Armstrong took “Vio” under his wing, slowly expanding his role on the staff. He began to travel with the team, participate in practices, and even join the team on the bench during the third period in the season’s final months.

“Not only are we developing the players, but just like Danny [Briere] always says, we’re always trying to look to develop the staff and front office staff and help everyone climb the ladder,” said Armstrong. “To see some guys start moving up and out of here is great in our first year already and I know Austin’s really excited and probably nervous at the same time to move across the country but it’s going to be great for him.”

Violette will keep a Portland connection on his new journey – the Gulls are coached by former Portland Pirates bench boss Kevin Dineen – who was at the helm for six seasons from 2005-11, missing the playoffs just once in that span.

“I am very excited to work alongside Kevin, Sylvain Lefebvre, and David Urquhart for these next couple years,” said Violette. “All of these guys had very successful playing careers and have made a name for themselves in the coaching world as well and I am excited to be able to work with them and be around them every day.”

For Austin, his memories of the Mariners are all about a family environment, and coaching lessons learned from a staff of whom he offers his thanks.

“From the staff to the guys in the room, I always felt a part of the family from day one and I think that is something that isn’t always the case in some places. I learned a lot from Riley and Anthony, and I am very thankful for everything that they taught me.”

The San Diego Gulls are the AHL affiliate of the Anaheim Ducks, and are entering their fifth season of operation. Last season, they led the AHL in attendance, and lost in the Western Conference Finals to Chicago. More can be read about Austin Violette’s life leading up to and through his first season with the Mariners, in this blog post, written in June by Austin himself on the Official Mariners Blog, Sea For Yourself.

The second season of Maine Mariners ECHL hockey kicks off October 11th at home when the Adirondack Thunder visit the Cross Insurance Arena for a 7:15 PM faceoff. Full and half season plans along with 12-game mini plans, flex packs, and group tickets are on sale now by calling 833-GO-MAINE or visiting the Mariners front office at 94 Free St. in Portland. Single game tickets will go on sale September 16th, with a special “Opening Night Pack” available through September 13th.