PORTLAND, ME – November 23, 2018 – Defenseman Vince Pedrie was reassigned from the AHL’s Hartford Wolf Pack to the Maine Mariners on Friday. The 24-year-old blue-liner joins the team as defenseman Ryan Culkin was called up Thursday to Laval.

Pedrie, a Rochester, Minnesota native, comes to the Mariners after playing the 2015-16 and 2016-17 season with Penn State (Big 10) where he help the Nittany Lions to their first and only NCAA Big 10 Championship title. He was one of four Penn State players to make the All-Tournament Team. Later that same season Pedrie joined the Hartford Wolf Pack playing in 9 game with 5 points. Pedrie signed an entry level contract with the Ranger in March of 2017 and spent the entirety of the 2017-18 season in Hartford playing in 58 games for 3 goals and 11 assists for 14 points.

The Mariners are home tomorrow Saturday, November 24th to host the Manchester Monarchs at 6:00 PM. It’s Teddy Bear Toss Night and the first 2,000 fans through the gate will receive a Mariners winter beanie. All stuffed animal donations can be thrown onto the ice following the Mariners first goal. Proceeds will be benefit Maine’s Marines Toys for Tots and local children’s charities. Tickets can be purchased at MarinersOfMaine.com or by calling 207-775-3458. 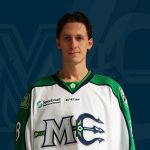