GLENS FALLS, NY – February 26, 2022 – Sebastian Vidmar’s power play goal midway through the third period – his second of the night, broke a 3-3 tie and ultimately gave the Adirondack Thunder a win over the Mariners on Saturday night, despite surrendering a two goal lead early in the final frame.

After being shut out through the first 40 minutes last night, Adirondack struck early to grab a 1-0 lead. Tyler Irvine, who has racked up 10 points against the Mariners this season, drove down the left side and beat Zach Bouthillier up high at 2:36 mark of the first period. The Mariners went to the power play a few minutes later and it was Cam Askew scoring for the fifth game in a row to tie it up. Mathew Santos took the puck to the net from the left circle and Askew finished it off just outside the goal crease, his third goal of the weekend. Bouthillier made an impressive save on Adirondack’s Sebastian Vidmar late in the period during a Thunder power play chance. The game was tied at one after 20 minutes.

The Thunder scored twice early in the 2nd to open up a 3-1 lead. University of Maine alumnus Ryan Smith threw a shot through traffic from the point that got past Bouthillier at 2:09 of the period to break the 1-1 tie. A few minutes later, Joe Masonius’ blast hit a body in the high slot and caromed to Sebastian Vidmar in the right circle, who squeezed a shot through Bouthillier to stretch the Thunder lead to two. Adirondack carried their 3-1 lead into the third.

The Mariners again capitalized on the power play early in the third when Keltie Jeri-Leon found a loose puck off a scrambled faceoff at 1:51 and slipped it through Thunder netminder Alex Sakellaropoulos. Just minutes later, they tied the game, defenseman Nate Kallen burying a rebound from a shot by Mathew Santos from the right circle. Kallen has four of his five goals this season again Adirondack. Zach Malatesta was assessed a double minor penalty at 5:43 of the period, of which the Mariners killed all but the final ten seconds when Vidmar got his second of the game. An empty netter by Nick Rivera would bring the game to a 5-3 final.

The Mariners (22-21-4-2) continue their road trip next weekend with a pair of crucial games in Worcester against the Railers on March 5th and 6th, game times of 7:05 PM and 3:05 PM respectively. The next home game is Wednesday, March 9th also against the Railers at 7 PM, “Reading Night.” Tickets for all home games can be purchased online at MarinersOfMaine.com/tickets or by visiting the Trusted Choice Box Office inside the Cross Insurance Arena. 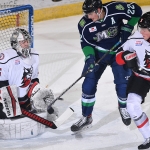 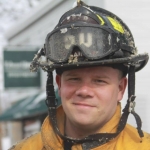