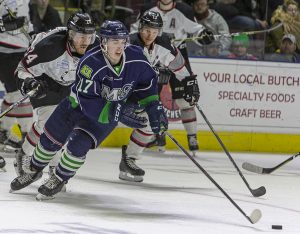 PORTLAND, ME – October 24, 2019 – Forward Ty Ronning was recalled from the Mariners to the Hartford Wolf Pack by the New York Rangers on Thursday. Ronning is coming off a successful road trip, in which his registered five points in the four games, while also celebrating his 22nd birthday.

Ronning, a native of Burnaby, BC, is the son of former NHL star Cliff Ronning. He was selected in the 7th round of the 2016 NHL draft, 201st overall by the Rangers, and made his debut as a pro with Hartford at the end of the 2016-17 season. In 2017-18 he returned to his junior team, the Vancouver Giants of the WHL, and had a monster year, putting up 84 points in 70 games. Ronning split the 2018-19 season between Maine and Hartford. With the Mariners, he had 12 goals and 10 assists in 25 games, including five points in his ECHL debut on November 24th, 2018 against the Manchester Monarchs. All five points came in the third period as Ronning led a big comeback victory. In 23 games with Hartford last season, Ronning scored four goals with one assist.

Ronning had five points on the Mariners’ recent road trip, all in their weekend series at Reading. In a 5-3 win on Saturday, Ronning scored two goals plus an assist. On Sunday, as he celebrated his 22nd birthday, he added another two points with a goal and an assist in a 5-4 Mariners loss.