PORTLAND, ME – March 8, 2019 – Dwyer Tschantz, Dillan Fox, and Johnny McInnis all had multi-point games, while Connor LaCouvee allowed just one goal for the second straight game and the Mariners cruised to a 4-1 victory on Friday night over the South Carolina Stingrays at the Cross Insurance Arena. Maine extended its point streak to six games and twelve of the last thirteen.

The only goal of the first period came about midway through when Dillan Fox slipped a backhand between the pads of Parker Milner as he jumped on a rebound from a Josh Couturier shot, breaking an 0 for 26 power play drought. Connor LaCouvee made 11 saves as Maine led 1-0 at the end of one.

At 6:04 of the 2nd period, it was a Milner rebound once again that allowed the Mariners to double their lead. Jon Jutzi unloaded from the point and Dwyer Tschantz flipped the loose puck in to make it 2-0. About nine minutes later, Tschantz got another after a long series of shifts that kept the Stingrays defenders on the ice and out of gas. Tschantz stuffed home a backhand, stepping out from behind the net to stretch the lead to 3-0. For good measure, Wade Murphy added a fourth goal at 18:15, cutting into the slot and beating Milner with a stick-side wrister, set up nicely by Johnny McInnis. Maine held South Carolina to just six second period shots.

The only goal of the third came at 12:20 when Jonathan Charbonneau beat Connor LaCouvee’s glove to spoil his shutout bid late in the third for the second game in a row. The Stingrays put 20 shots on goal in the 3rd period, and LaCouvee finished with 36 stops for his 12th win. Milner made 35 of 39 in the loss. 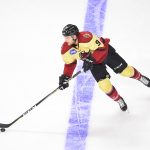