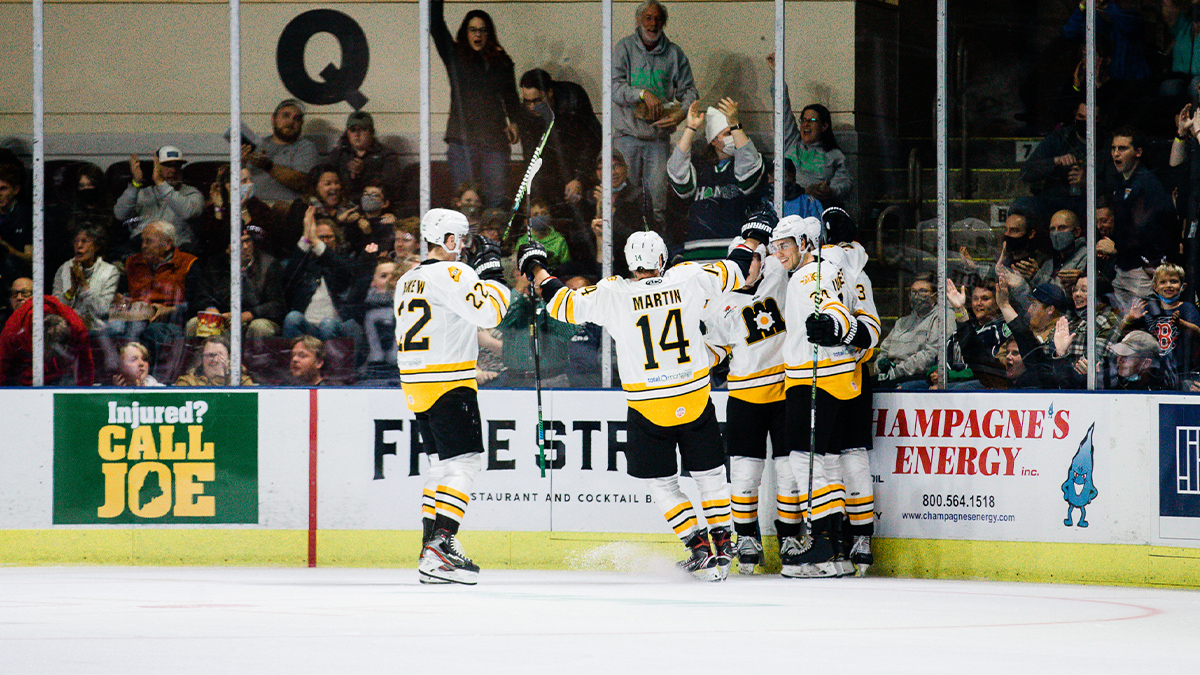 PORTLAND, ME – October 22, 2021 – Eduards Tralmaks spent four seasons endearing himself to fans in Northern Maine. It took him just one game to win over the hearts of Mariners fans. In Maine’s 6-3 opening night victory over the Worcester Railers on Friday at the Cross Insurance Arena, Tralmaks registered a hat trick, including the game-winning goal. Not to be outdone, goaltender Jeremy Brodeur made 51 saves to shut down a 54-shot Railer attack.

A crowd of over 4,500 turned out for the first Mariners regular season game in 591 days, as the Mariners sported black and gold throwback jerseys to commemorate the new Boston Bruins affiliation. After a scoreless first half of the opening period, Tralmaks broke the double zeroes as he drove the net to bury a pass to the short side post from Cam Askew at 13:50. Brodeur’s perfect period was broken at 16:18 when Railers defenseman Nick Albano beat him with a point shot on a 4-on-3 Worcester power play, tying the score. In the final minute of the first, Pascal Laberge put Maine back ahead when he cleaned up a loose puck fed by Justin Brazeau from the right of Worcester goaltender Justin Kapelmaster. The Railers outshot Maine 26-11 in the opening frame.

In a much more even second period, the Mariners extended their lead with a power play goal from Lewis Zerter-Gossage at 14:49 of the middle frame. The Mariners gained control off an offensive zone faceoff and immediately moved the puck from circle to circle, Nick Master setting up Zerter-Gossage’s wrister. Maine led 3-1 at the end of two.

The Railers quickly got back in the game with a pair of 4-on-4 goals in the first 1:16 of the third period. Jacob Hayhurst beat Brodeur’s glove with a nifty crossover move just 51 seconds into the frame, which sparked Mike Cornell’s follow up of Anthony Repaci’s net drive just 25 seconds later to make it 3-3. The Mariners were able to regain the lead at 7:34 when Zerter-Gossage found Tralmaks to Kapelmaster’s right on a 2-on-1 around the Worcester net. Tralmaks then completed the hat trick five minutes later, camped on the door step, deflecting home a Brazeau power play shot. Mathew Santos added a goal at 17:50 to complete the 6-3 win.

Brodeur made 51 saves in his Mariners debut to earn the win, while Kapelmaster made 28 shots on 34 Maine shots. New Mariners head coach Ben Guite earned his first professional victory in his first game. Guite was a coach at the University of Maine for the past eight seasons.

The Mariners will visit Worcester on Saturday for a 7:35 PM faceoff at the DCU Center to finish the weekend.

MARINERS FIRE 45 SHOTS BUT FALL IN WORCESTER
Scroll to top