PORTLAND, ME – January 31, 2019 – Follow the Mariners’ 3-1 loss in Reading on Wednesday night, veteran defenseman Zach Tolkinen was loaned to the AHL’s Hartford Wolf Pack. It is the second time this month that the Mariners captain heads to Hartford. He was initially loaned on January 19th, but did not appear in a game and was returned the following day.

The 29-year-old Tolkinen signed with the Mariners in early July after playing the 2017-18 season under Riley Armstrong with the Wheeling Nailers. Since turning pro in 2014-15, Tolkinen has played for five ECHL teams (Elmira, Missouri, Rapid City, Wheeling, and Maine), suiting up in 293 career games. Known for his stay-at-home defensive style, Tolkinen’s best offensive year was his rookie season, when he had five goals and 14 assists with the Elmira Jackals and played in all 72 games. This season for the Mariners, Tolkinen has one goal and 11 assists in 33 games.

A native of Lino Lakes, Minnesota, Tolkinen played two seasons at Centennial High School, two in the NAHL for Owatonna and Fairbanks, and four years of Division I hockey at Quinnipiac University before turning pro. On October 11th, 2018, Tolkinen was named the first captain in Mariners franchise history.

Tolkinen skated in warm-ups before Hartford’s game vs. Springfield on January 19th, but did not appear in the game. He was returned to Maine the next day. The Wolf Pack are at Hartford tomorrow night and host Rochester on Saturday.

The Mariners are in Manchester tomorrow at 7 PM before returning home for a meeting with the Adirondack Thunder on Saturday, February 2nd. It’s “Women in Sports night” presented by the Maine Sports Commission. The first 2,000 fans through the gate will also receive a Grocery Tote Bag, presented by Townsquare Media. Game time is 6:00 PM. Tickets can be purchased HERE or by visiting or calling the Trusted Choice Box Office: 207-775-3458. 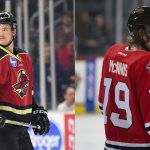