PORTLAND, ME – November 29, 2019 – Special teams were the defining difference on Friday night as the Mariners fell 6-0 on home ice to the Indy Fuel. It was a 1-0 game until late in the 2nd period when things started to unravel the Mariners, and they couldn’t recover, nor solve Indy netminder Chase Marchand.

“We had opportunities to score on our power play. We didn’t capitalize and we gave up three on our penalty kill so that turns the script pretty quick,” said Mariners head coach and assistant general manager Riley Armstrong.

It was Spencer Watson’s power play goal – his second goal of the game – at the 19:08 mark of the 2nd period that set off a string of four Indy goals in an aggregate span of 4:24 from the end of the middle from to the start of the third. It was in that stretch that Indy turned a 1-0 lead into 5-0. Dmitry Osipov’s goal with just nine seconds left in the 2nd, sent the Mariners into the locker room down three.

Jay Dickman scored a power play goal 44 seconds into the third to make it 4-0, and Nathan Noel made it 5-0 at 3:32. Sam Kurker deflected Alec Brooks’ floating shot home at 16:52 for Indy’s third power play goal of the night. Indy went 3/4 with the man advantage while the Mariners power play went 0/6. Both Watson and defenseman Keoni Texiera led the Indy offense with three points a piece.

Chase Marchand, between the pipes for Indy, stopped all 31 shots he faced for his first professional shutout. Tom McCollum made 25 stops in the losing effort. Indy snapped a seven game losing streak with their win, while the Mariners were shut out for the second time in three home games.

“In the whole scheme of a 72 game schedule you can’t fold up the tent halfway through a game you have to keep pushing on because just like the sun comes up tomorrow there’s another game so you have to get back to work,” said Armstrong.

That game tomorrow will be home against the Newfoundland Growlers at 6 PM. It’s “Aquaman Night” presented by Spectrum Healthcare Partners. The night will feature specialty Aquaman jerseys as part of the league’s partnership with DC Comics, which will be up for auction during the game through the ECHL on the Handbid App. A balloon artist will also be on hand on the concourse. Groups of 10 or more can call 833-GO-MAINE to get tickets at a discounted price. Individual game tickets can be purchased at MarinersOfMaine.com, in person at the Trusted Choice Box Office at the Cross Insurance Arena, or by calling the box office at 207-775-3458. 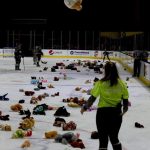