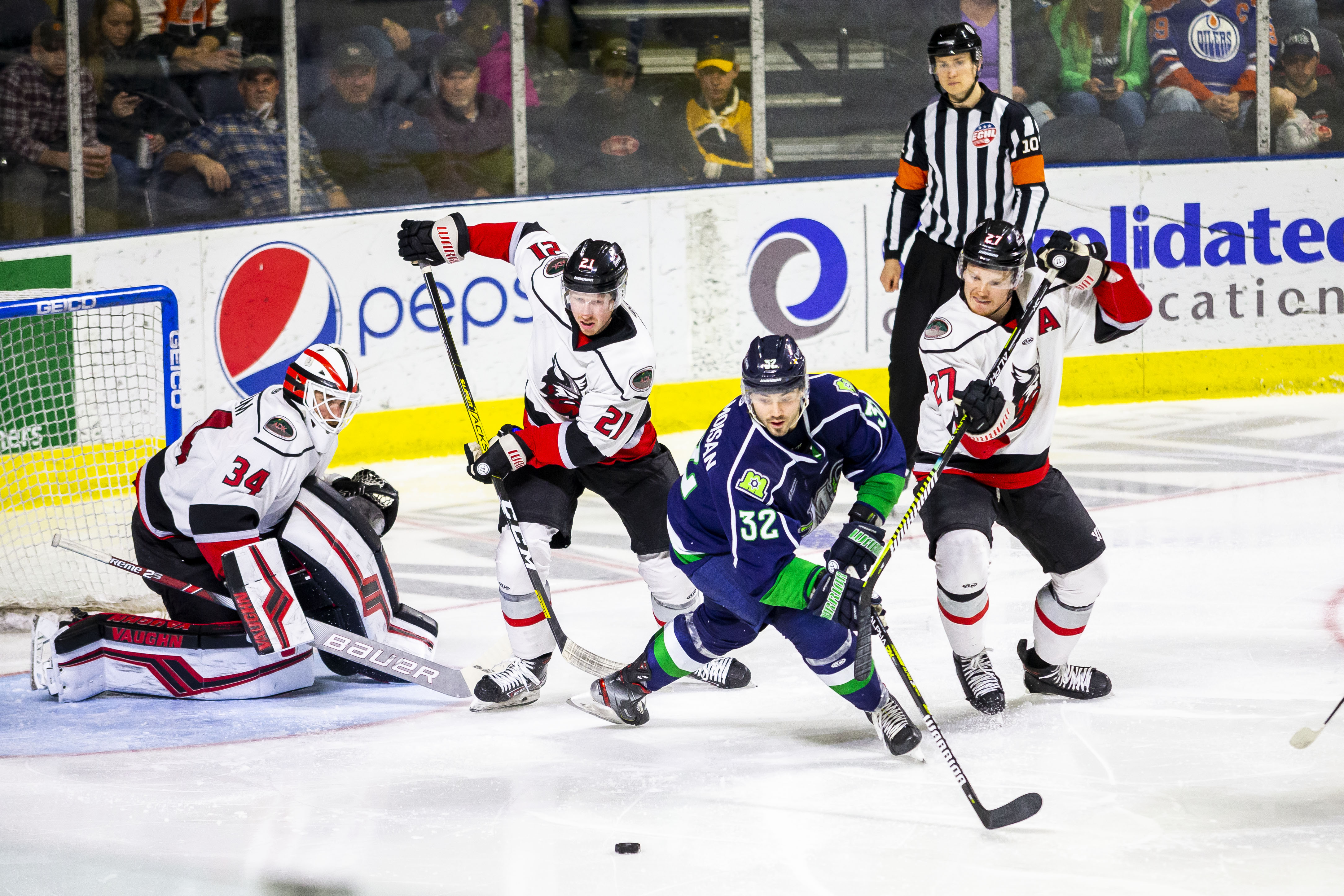 PORTLAND, ME – January 11, 2020 – Robbie Payne’s 19th point of the season against the Mariners turned out to be the game-winning goal on Saturday night in a 4-2 Adirondack Thunder victory over Maine at the Cross Insurance Arena. The Mariners let leads of 1-0 and 2-1 slip, and were shut down by Thunder netminder Eamon McAdam through the final 40 minutes of play. For Adirondack, it was their first win in seven tries in the 18-game head-to-head season series.

The first period saw four goals in total, the Mariners scoring first for the second night in a row. Will Pelletier deflected Ryan Culkin’s point shot off the post, off McAdam and over the goal line at 4:15 to get the scoring started. Morgan Adams-Moisan picked up a secondary assist on the goal. For Culkin, it was his 100th ECHL point.

At 7:23, Brandon Crawley turned the puck over inside the Mariners blue line and Ara Nazarian beat Francois Brassard’s blocker to tie the game. It was only tied for 16 seconds, however, as Dillan Fox responded with a wrister over McAdam’s glove at 7:39 to put Maine right back ahead. The Thunder tied it up again at 16:09 when Colby Sisson’s blue line drive was deflected home by Casey Pierro-Zabotel.

Neither team scored in the second period, as goaltenders and penalty killers stood tall. The Mariners killed two penalties, plus the majority of a 5-on-3 resulting from infractions at the end of the first. Adirondack also executed two successful kids. Brassard shut down Charlie Curti on a breakaway at the tail end of the period to keep the game tied into the third.

Adirondack was the better team for most of the third, registering the first 10 shots of the period, and they broke the tie at 5:23 when Robbie Payne beat Brassard on a rebound, set up by Jake Linhart and James Henry. The Mariners had a great chance late late in the third when Adirondack took three consecutive penalties. Linart and Alex Tonge took back-to-back delay of game penalties followed by a tripping call to James Phelan to set up a 6-on-3 advantage after the Mariners pulled Brassard. The Thunder won a key faceoff with under a minute to go and defenseman Kelly Summers shot the puck off the glass, rolling into the empty net to seal a 4-2 Thunder win.

Adirondack snapped a four game skid, while the Mariners dropped their fourth in a row, falling three points behind the Thunder for fourth place in the North Division.

The Mariners finish the Winning 3Kend hosting Newfoundland tomorrow afternoon at 3 PM. The promotion is “Kids Run the Show,” where kids who won an online sweepstakes will get the chance help with game presentation including the radio broadcast, in-game hosting, running music, and reading the lineup to the team in the locker room. Family Four packs are available starting at $80, but must be purchased in advance of game day. Groups of 10 or more can get discounted tickets to all games by calling 833-GO-MAINE. Individual tickets can be purchased at MarinersOfMaine.com, at the Trusted Choice Box Office inside the Cross Insurance Arena, or by calling 207-775-3458.