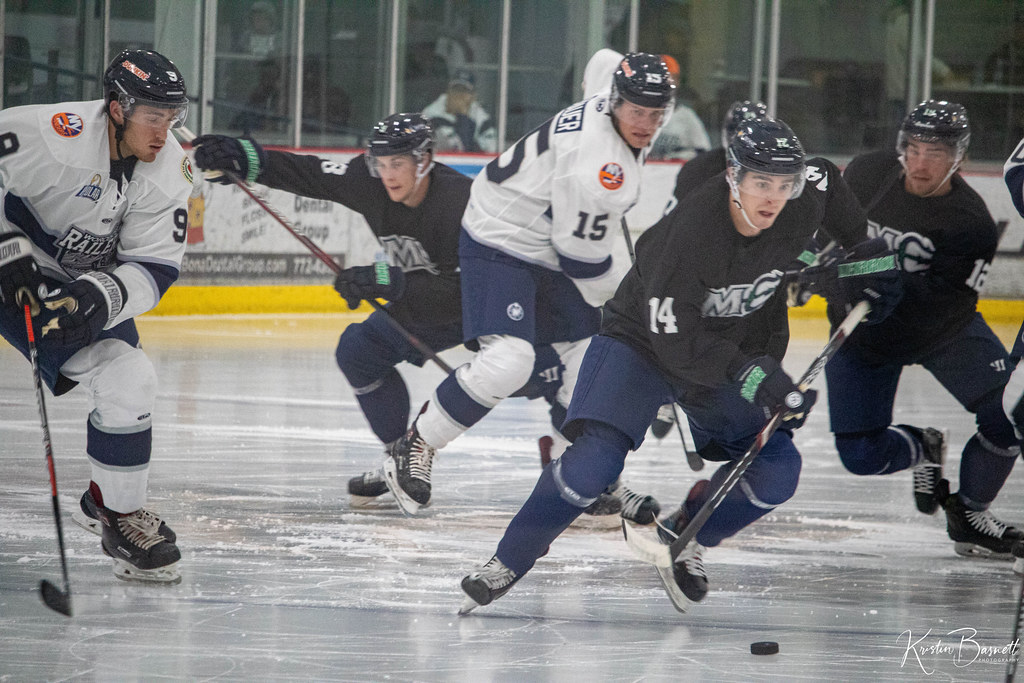 Hart (#14) skates in the Mariners’ preseason contest vs. the Worcester Railers on Oct. 5th at the Rinks at Exeter. Photo credit: Kristin Basnett, The Sin Bin

PORTLAND, ME – November 5, 2019 – Ted Hart has a second chance to become the first Maine native to suit up for the Mariners. The Cumberland born forward signed to a standard player contract (SPC) on Tuesday, re-joining the Mariners from the SPHL’s Peoria Rivermen. Hart was in training camp with the Mariners, but did not make the opening night roster.

One of three hockey playing brothers, Hart is an alumnus of Greely High School where he was a part of back to back state championship teams in 2012 and 2013. He went on to play collegiately at Yale University, where he was two-time ECAC All-Academic. Hart graduated last spring and signed with the Mariners over the summer. Hart played in Maine’s lone preseason contest against the Worcester Railers on October 5th in Exeter, New Hampshire. He was released the following day.

After the Mariners cut him from training camp, the 23-year-old Hart signed in the Southern Professional Hockey League with the Peoria Rivermen. In five SPHL games, Hart has a goal and five assists.

“I’m very excited to be back in Maine and get another opportunity with the Mariners,” said Hart. “I really enjoyed my time with the Peoria Rivermen and I was able to work on some details in my game, so hopefully I can continue that success and contribute to the Mariners organization.”

In the past two weeks, the Mariners have lost three forwards, as Ty Ronning, Lewis Zerter-Gossage, and Ryan Dmowski were all recalled to AHL Hartford.

The Mariners are home on Saturday night against the Adirondack Thunder at 6 PM for Military Appreciation Night presented by Martin’s Point in partnership with Bath Iron Works. The first 2,000 fans through the door will receive an exclusive Mariners winter “lobster” beanie, courtesy of Martin’s Point. It’s also a “Family Four Pack” game: families of four can get four tickets, four food and drink vouchers, and four Mariners can koozies for as low as $80. Family four packs must be purchased in advance. The Mariners are also home on Monday, November 11th at 7:00 PM against the Reading Royals. Famous Philadelphia Flyers mascot Gritty will be in the building. Limited Gritty packs are available HERE which include a Gritty puck, Mariners hat, a professional photo with Gritty, and more. For more information and to purchase tickets, CLICK HERE, call 833-GO-MAINE, or visit the Mariners front office at 94 Free St. in Portland.