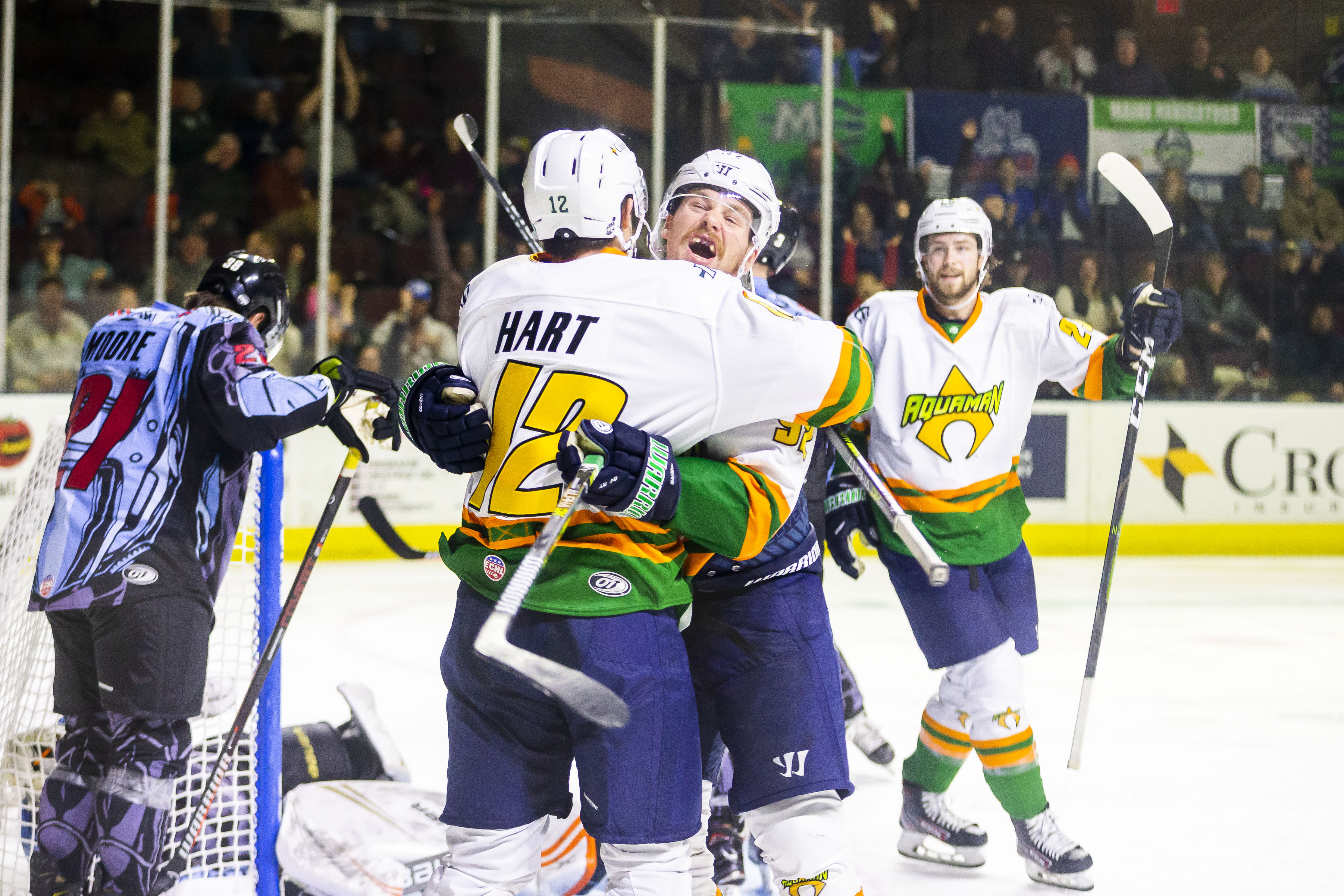 PORTLAND, ME – November 30, 2019 – Ted Hart and Jake Elmer scored 19 seconds apart in the third period to wipe out a 2-0 deficit, but Brady Ferguson’s power play goal at the 8:30 mark of the third swung momentum back to Newfoundland’s side and the Growlers skated away with a 5-2 win over the Mariners on Saturday night at the Cross Insurance Arena.

The first period was about as even as it could get with the two teams even in goals (0), shots (8), and penalty minutes (2). It took until the 3:53 mark of the 2nd for the game’s first goal and it came off the stick of Newfoundland forward Brady Ferguson. Midway through the frame, Connor LaCouvee made a remarkable glove save to help the Mariners kill a penalty. At 15:24, Ferguson found Marcus Power from behind the net and he extended the Growlers lead to 2-0. The Mariners failed to convert on a pivotal 5-on-3 chance as the period came to an end.

Nevertheless, head coach and assistant general manager Riley Armstrong liked the way his team was playing as the game headed to the third. The Mariners already have three wins when trailing after two periods this season.

“I just spoke to them about being a third period team,” he said. “I felt that we were playing good so if we kept being a consistent team and playing the right way eventually things will drop and they did.”

At 6:07 of the third period, Cumberland native Ted Hart scored his first home goal (his third overall), as he buried his second of two chances over a fallen Growlers netminder Angus Redmond. Linemates Terrence Wallin and Ryan Gropp collected assists.

“It was pretty cool,” said Hart. “I had a lot of family and friends here so it was special for them to see that and it felt good especially because we could cut the deficit in half. Hopefully there’s more to come.”

Just 19 seconds later, Dillan Fox chipped a puck over to Jake Elmer on a rush to quickly even the score at two, and bring the Cross Insurance Arena alive. Newfoundland called its timeout, which ended up paying off.

Marc-Olivier Crevier-Morin was called for tripping at 7:27, setting up Brady Ferguson’s second tally of the game – in fluke fashion. Ferguson, from the left wing corner, swung the puck on goal, and it caromed off LaCouvee’s skate at the post and just over the goal line. At 14:43, Trey Bradley added insurance for Newfoundland when he finished Dylan Vander Esch’s pass, following a breakaway out of the penalty box in which he was stopped. Vander Esch added an empty net goal at 19:18.

The Mariners play a home-and-home with the Adirondack Thunder next weekend, and are home Saturday at 6 PM for Teddy Bear Toss, presented by the Maine Bureau of Highway Safety. All stuffed animals collected when fans throw them on the ice after the first Mariners goal, will benefit local fire departments. The first 2,000 fans through the door will also get a collectible mini-stick, courtesy of Jobs in ME. Groups of 10 or more can call 833-GO-MAINE to get tickets at a discounted price. Individual game tickets can be purchased at MarinersOfMaine.com, in person at the Trusted Choice Box Office at the Cross Insurance Arena, or by calling the box office at 207-775-3458