PORTLAND, ME – November 2, 2018 – In an exciting back and fourth game in front of a big crowd on Friday night at the Cross Insurance Arena, the Mariners fell in a shootout to the Reading Royals, 4-3. The Mariners battled back from two one-goal deficits, including one in the final minute of regulation to force OT on a dramatic goal by Terrence Wallin. Adam Schmidt’s goal in the third round of the shootout turned out to be the game-winner.

John Furgele opened the scoring with his first professional goal at 5:24 of the opening period when his shot from the right point got through traffic and beat Brandon Komm for a 1-0 Mariners lead. Newcomers Michael McNicolas and Shawn St. Amant each assisted on the goal. It remained 1-0 until just under five minutes remaining in the period when Frank DiChiara finished Michael Huntebrinker’s wraparound attempt, catching Maine goaltender Brandon Halverson out of position. At 19:07, Steve Johnson’s power play goal put Reading ahead going into the locker room.

The Mariners quickly tied the game 1:19 into the second period when Zach Tolkinen launched a soaring pass to Dawson Leedahl, who broke in alone and beat Komm to even the game at two. In a much tighter defensive period, only 15 combined shots were registered and the game entered the third period tied.

With Komm and Halverson both playing well, the game stayed 2-2 until the final 1:41 when Huntebrinker beat Halverson with a short-side dash up the right wing. After calling time out, the Mariners pulled Halverson to gain the extra attacker and Tolkinen found Terrence Wallin’s stick in front of the net. Wallin slid the puck around Komm’s pad to the tie the game at 19:11. On the goal, rookie forward Hayden Verbeek registered his first professional point with the secondary assist in his Mariners debut. The game proceeded tied through 3-on-3 overtime, with the Mariners outshooting Reading, 3-1.

In the first round of the shootout, Hunetbrinker and McNicholas traded goals. Huntebrinker drew Halverson out of his crease and deked around his pad before McNicholas kept the puck on his backhand to beat Komm. Josh MacDonald and Alex Kile were both stopped on their attempts, setting the stage for Adam Schmidt to score the game winner with a wrist shot over Halverson’s blocker. Verbeek was stopped by Komm to end the game. Komm made 28 saves on 31 shots while Halverson stopped 30 of 33.

The Mariners travel to Reading on Wednesday and Worcester on Friday before returning to the Cross Insurance Arena on Saturday, November 10th against the Worcester Railers for Marvel Superhero Night and Military Appreciation presented by Martin’s Point. The Mariners will wear Captain America jerseys and the first 2,000 fans will receive a free camo drawstring bag. Tickets can be purchased at MarinersOfMaine.com or by calling 207-775-3458. 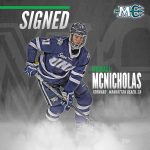