PORTLAND, ME – October 27, 2018 – Two goals each for Nic Pierog and Nick Moutrey powered the Manchester offense as they built a 4-1 lead through two periods and closed out a 5-2 win over the Maine Mariners on Saturday night at the SNHU Arena. The loss dropped the Mariners to 0-3-0-0 on the road.

Pierog scored the first goal of the game at 8:57 of the first with a wrister from above the right wing circle that Mariners goaltender Chris Nell never saw. Maine would tie the game at 13:46 when Zach Tolkinen beat Monarchs netminder Charles Williams with a 4-on-3 power play rocket. Alex Kile and Drew Melanson notched the assists as the teams skated into the intermission tied at one.

The Mariners came out flying in the second period but gave up an early goal when Nick Moutrey drove the net and finished a Tony Cameranesi pass to restore Manchester’s lead. Pierog scored his second at 6:42 with a shot from a bad angle that got through Nell. Spencer Watson got a back-breaking goal at 18:40 off a broken play in the Mariners zone to make it 4-1.

The Mariners got a step closer with just under eight minutes to go when Kile zipped home a power play goal from Tolkinen and Ryan Culkin. Kile is up to six goals on the season, far and away leading the team. With four minutes remaining, defenseman Brycen Martin found himself alone in front of Williams but ripped a shot over the net. Moutrey hit an empty netter from the Manchester blue line to seal the game.

The Mariners get almost a week off before returning to home ice on Friday against the Reading Royals at 7:30 PM. It’s Hockey Fights Cancer Night presented by the Holiday Inn By the Bay and also the second 1-2-3 Friday of the season: $1 hotdogs, $2 popcorn and $3 Bud Light until the start of the 2nd period. Individual tickets can be purchased by clicking HERE. 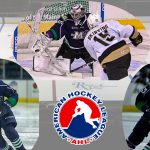