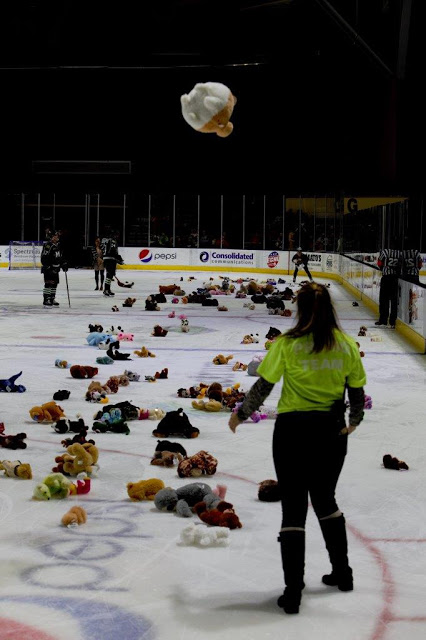 PORTLAND, ME – November 27, 2019 – The fur will fly at the Cross Insurance Arena on Saturday, December 7th in the second annual “Teddy Bear Toss,” presented by the Maine Bureau of Highway Safety. Fans are invited to bring stuffed animal donations to toss onto the ice following the first Mariners goal. All collected stuffed animals will be donated to local fire departments.

The Teddy Bear Toss is a famous holiday tradition that is held throughout all levels of hockey, collecting teddy bears and other stuffed animals for people in need. The spectacle of stuffed toys flying onto the ice after the home team’s first goal, has been well documented in places like Calgary, Alberta (WHL’s Calgary Hitmen), and Hersey, Pennsylvania (AHL’s Hershey Bears).

Mariners forward Greg Chase played in Calgary from 2011-15, where the Hitmen averaged over 20,000 stuffed animals in each year’s toss, and previously held the world record of 28,815 before being bested by the Hershey Bears in 2018.

“It was a crazy sight to be a part of,” said Chase. “Bears literally raining from the sky. The anticipation is different than any other game, you know it’s the first goal that sets off the chaos. The energy is different. I think it’s almost an advantage for the home team. You come out with that extra jump.”

Chase also gave his thoughts on the charitable component of the toss – which is at the core of the event.

“There’s no better feeling than seeing those kids faces when you hand them a bear,” he said. “This is a really special event for a lot of people. To be able to give back especially around the holidays is awesome. We get to do it in such a fun and cool way for the fans, that’s what makes our game unique.”

The Mariners held their first Teddy Bear Toss last November, with Riley Bourbonnais scoring the sacred goal midway through the second period. He was later overshadowed by Ty Ronning’s third period hat trick, leading the Mariners to a 6-4 comeback win over the Manchester Monarchs. The Mariners collected 1,153 stuffed animals last season, and are hoping to top that mark this year.

“Donated teddy bears are used by local fire and rescue services to comfort children during difficult times and stressful situations,” said Captain Robb Couture of the South Portland Fire Department. “Many of these bears will find their way onto our fire trucks and ambulances for just that reason.  We will also be using the bears to supplement the South Portland Christmas Toy Drive for local children in need of a special gift this holiday season.  Special thanks to the Mariners organization for supporting us and our local communities!”

The South Portland fire department will also have staff and a vehicle on hand at the game to help clean up the toss. 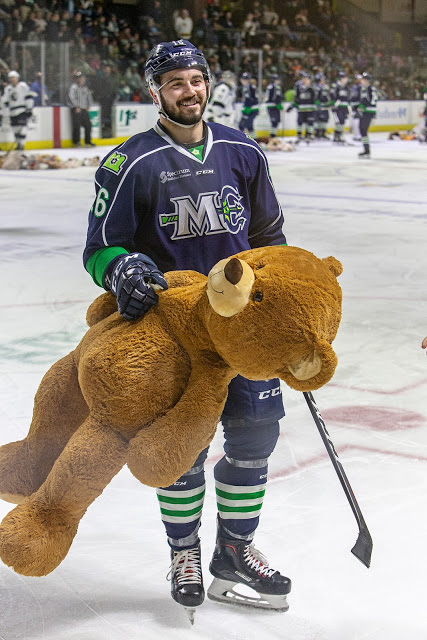 The Mariners will take on the Adirondack Thunder at 6:00 PM. The game also features a mini-stick giveaway for the first 2,000 fans through the door, courtesy of Jobs In ME. Families of four can take advantage of the “Family Four Pack,” which includes four tickets, four food and drink vouchers, and four Mariners can koozies for as low as $80. Family Four Packs are available for all Saturday and Sunday home games, but must be purchased in advance.

After Thanksgiving, the Mariners are home on Friday and Saturday, hosting the Indy Fuel and Newfoundland Growlers. Friday features Black Friday discounts at the Mariners merchandise stand: 20% off all Mariners pucks during the first intermission and 15% off all Mariners hats during the second intermission. Both promotions are limited to five items per customer and must be purchased with a credit or debit card. It’s also a 1-2-3 Friday with $1 Aquafina water, $2 Pepsi products, and $3 Bud Light drafts through the start of the second period. The puck drops at 7:15 PM.

Saturday night will feature specialty Aquaman jerseys as part of the league’s partnership with DC Comics. Jerseys will be up for auction through the ECHL. A balloon artist will also be on hand on the concourse. Groups of 10 or more can call 833-GO-MAINE to get tickets at a discounted price. Individual game tickets can be purchased HERE, in person at the Trusted Choice Box Office at the Cross Insurance Arena, or by calling the box office at 207-775-3458.