PORTLAND, ME – April 15, 2022 – Mathew Santos scored 1:40 into overtime to put the Mariners in the driver’s seat for a playoff spot with one game remaining in the regular season. The Mariners trailed 1-0 entering the third and rallied to get two points and jump over Worcester into the fourth and final playoff spot.

The only goal of the first 40 minutes came from Newfoundland’s Todd Skirving at 5:45 of the first. Growlers defenseman Ben Finkelstein took the puck below the goal line and found Skirving in front, who beat the glove of Stefanos Lekkas. The Mariners were outshot 14-4 in the opening period, but bounced back to control the middle frame.

Despite a much better second period, Growlers rookie goaltender Rylan Parenteau stole the show in his professional debut, stopping nine shots, including multiple high quality scoring chances. The Growlers carried the 1-0 lead into the third.

It remained 1-0 until deep into the third when Mariners defenseman Andrew Peski finally broke through, with a shot from the right point that beat a screened Parenteau to tie the game. Both teams then had a power play chance to grab a late lead, with Newfoundland’s opportunity extending into overtime. After the Mariners killed the penalty off, Santos drove down the right wing side, got off a toe-drag shot that Parenteau stopped, but Santos cleaned up the rebound for the game-winner.

With the Mariners win and Worcester’s 5-0 loss to Trois-Rivieres, Maine gains a .507 to .500 advantage in point percentage entering the final day of the season. The Mariners can clinch a playoff spot on Saturday with a Railers regulation loss, a Mariners win, or both teams getting a total of one point.

The Mariners (32-31-5-3) conclude the regular season on Saturday night at 6 PM, hosting the Growlers once again. It’s the continuation of “Fan Appreciation Weekend” and is sponsored by Chick-Fil-A. The first 500 fans will receive a Mariners magnetic photo frame courtesy of Skowhegan Savings Bank. The ECHL’s championship trophy, the Kelly Cup, will also be on display. Tickets can be purchased online at MarinersOfMaine.com/tickets or by visiting the Trusted Choice Box Office inside the Cross Insurance Arena. 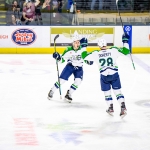 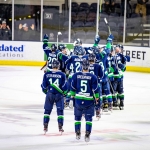