PORTLAND, ME – December 4, 2021 – The Mariners led 1-0 after 40 minutes, but allowed four goals in the third, and dropped their fourth in a row on Saturday night to the Adirondack Thunder, by a score of 4-1. Mathew Santos scored the “Teddy Bear Toss” goal in the 2nd period, the Mariners only goal of the game.

Neither team scored in the opening period, but Mariners netminder Callum Booth, playing his first regular season game of the ECHL season was a standout, making 13 saves. The game advanced past the halfway point in a scoreless tie, but at 12:05 of the 2nd, Mathew Santos sent the teddy bears flying. Just as the Mariners were completing a line change, Conner Bleackley sprung Santos on a breakaway and Santos beat the glove of Thunder goaltender Mareks Mitens to give the Mariners the 1-0 lead.

In the opening minute of the third, Booth made a mistake, giving a puck right to Adirondack’s Ryan Smith, who shot it into an open net to tie the game at one. The Thunder then took the lead at 7:59 of the third on a shot from Sebastian Vidmar that found its way through a screen and past Booth. At 14:25, the Thunder went up 3-1 when Pete MacArthur banked one off Booth’s pad from the goal line. Nick Rivera hit the empty net at 18:38 to bring the game to a 4-1 final.

Mitens got a win for the second night in a row, making 28 stops. Booth made 27 saves in the losing effort. Over 1,500 stuffed animals were collected for Marine Toys for Tots and the Holden Police Department.

The Mariners (6-7-2-1) and Thunder meet again in Portland on Sunday afternoon at 3:00 PM for “Beacon’s Half-Birthday.” The first 1,000 fans will receive a Beacon “shirsey,” courtesy of Unifirst. Individual tickets for all games can be purchased online at MarinersOfMaine.com/tickets or by visiting the Trusted Choice Box Office inside the Cross Insurance Arena. Family four packs are available for both games at MarinersOfMaine.com/shop. 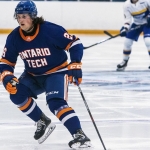 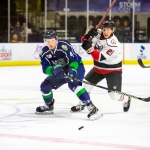