PORTLAND, ME – February 8, 2019 – Seven first period goals by the Cincinnati Cyclones made for an early decision on Friday night at the Cross Insurance Arena as the Maine Mariners dropped their first of a three-game home weekend series by a final score of 8-1 to the Western Conference leaders.

The night got off to an uncomfortable start right away when Connor LaCouvee’s equipment issue forced Ed Minney into an unexpected start. An early power play goal by Brady Vail followed by a Judd Peterson even strength tally gave the Cyclones a 2-0 lead in the first 2:50 of the game. The Mariners then were awarded a four minute power play on a double minor for high sticking, but surrendered a shorthanded breakaway goal to Myles Powell. After Vail scored again at 7:29 to make it 4-0, the Mariners called their timeout. The game settled down for the next 10 minutes, but Cincinnati ratcheted it up again in the final 2:15 with three more goals from DeVante Stephens, Vail’s hat trick goal, and a capper from Ben Johnson.

Minney played the final 40 minutes in goal for the Mariners, stopping a total of 17/19 in the game, but being saddled with the loss. The Mariners got in the board early in the 2nd when Drew Melanson set up Greg Chase on the power play. Chase has scored a goal in three consecutive games. Jon Jutzi had a goal waived off late in the third before Pascal Aquin finished a five point game (1 goal, 4 assists) at 19:39 to bring the game to its 8-1 final score. Ben Johnson had a four point night as well with a goal and three assists. The winning netminder was Jonas Johansson, who stopped 26 of 28.

The Mariners continue their homestand with EqualityMaine Pride night on Saturday against the Greenville Swamp Rabbits at 6:00 PM. The night will include a t-shirt giveaway to the first 2,000 fans. Family four packs are available through midnight at MarinersOfMaine.com. A matinee follows on Sunday is matinee against the Wheeling Nailers at 3:00 PM, featuring a postgame skate with the team, sponsored by Redbank Village. Fans must bring their own skates and those under the age of 18 will need a helmet. Any fans who attend all three games this weekend and check in at the Promotions Port are eligible to win a Mariners prize pack. General admission tickets can be purchased HERE or by visiting or calling the Trusted Choice Box Office: 207-775-3458. 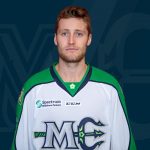