PORTLAND, ME – February 13, 2019 – Forward Ty Ronning was recalled to the Hartford Wolf Pack on Wednesday. Ronning has 19 points in 22 games with the Mariners but hasn’t appeared in a game since suffering a lower body injury on January 18th against Manchester.

A 7th round pick of the New York Rangers in 2016, Ronning was assigned to Maine on November 19th and made quite a splash in his ECHL debut, scoring three goals and adding two assists all in the third period on November 24th against Manchester, leading the Mariners to a come-from-behind 6-4 win. In total, Ronning has scored nine goals, adding ten assists in 22 games as a Mariner this season. On January 12th in Brampton, Ronning scored the overtime winner in the game’s final seconds on what was the Mariners’ only shot of OT.

Since his professional debut in 2016-17, the 21-year-old Ronning has played 23 games with Hartford, scoring three goals and adding three assists. He joined Hartford out of the Vancouver Giants WHL organization, where he put up back to back 50-point seasons to finish his Junior career.

The Mariners are home tonight, finishing their five game homestand as they return to divisional play and host the Worcester Railers at 7:00 PM. Only two home games remain in the month of February – the other is Sunday, February 24th at 3:00 PM also against Worcester. A full team autograph session will follow the game. Single game tickets can be purchased HERE or by visiting or calling the Trusted Choice Box Office: 207-775-3458. 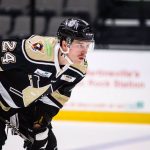