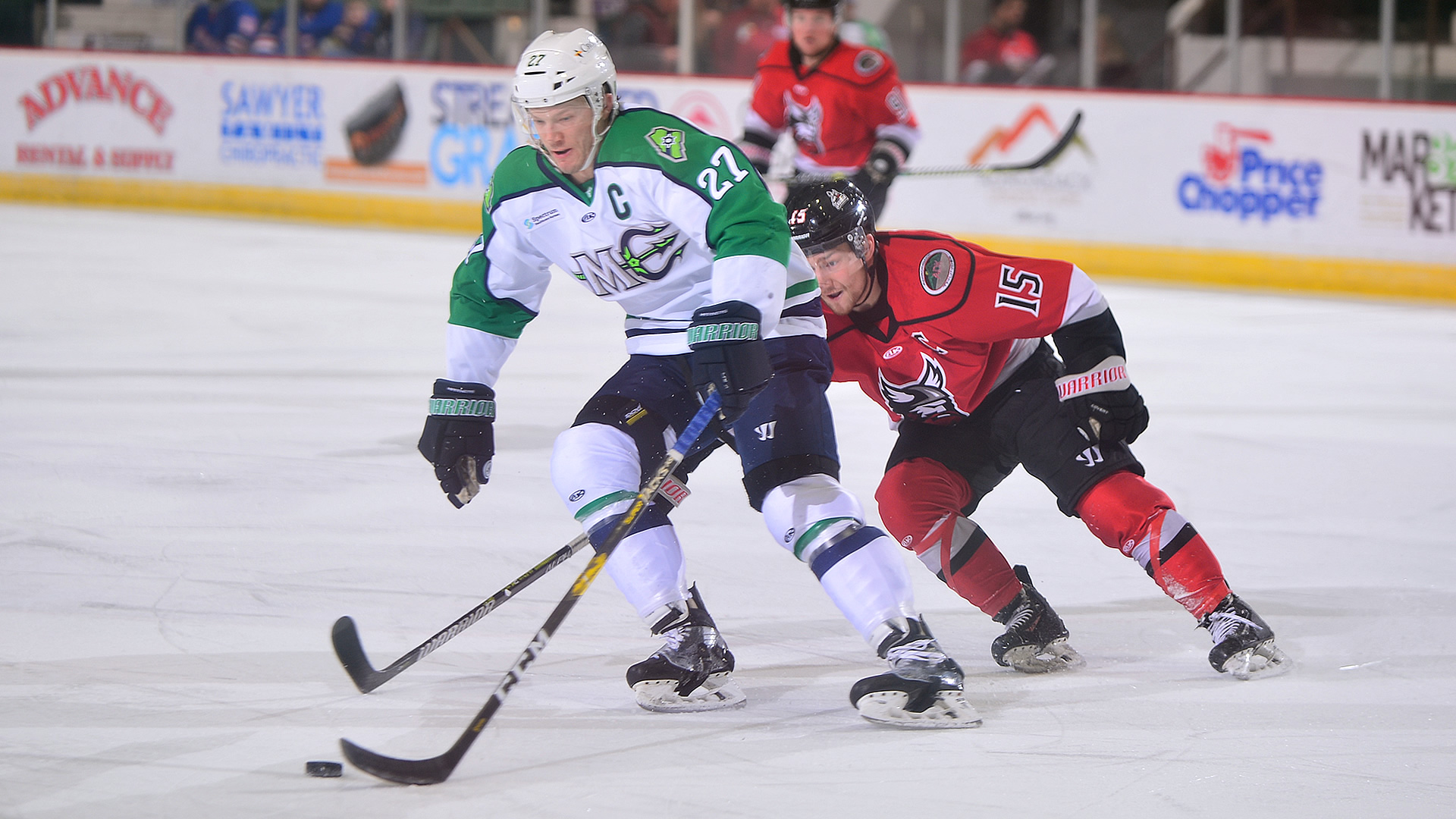 GLENS FALLS, NY – January 15, 2020 – For the second night in a row, the Mariners potted two third period power play goals, as they earned a big 4-1 road win over the Adirondack Thunder at the Cool Insuring Arena on Wednesday night. Ty Ronning and Alex Kile scored two goals each, while Francois Brassard made 28 saves to help the Mariners climb over Adirondack in the North Division playoff race.

Fireworks came early when Robbie Payne delivered a check to head of Dillan Fox at 7:38, prompting a fight between Payne and Brian Hart. The Mariners couldn’t convert on the five minute power play, as Francois Brassard came up big with a save on Adirondack’s Matt Salhany on a shorthanded breakaway. In the final minute of the period, Brian Hart came up with a turnover just inside the Mariners blue line and busted away on a 2-on-1 with Ty Ronning. Ronning finished Hart’s feed across the slot for his sixth goal of the season, giving the Mariners the lead at the end of one.

The Mariners took several penalties in the second period, eventually allowing Adirondack to tie it at 9:51 when Charlie Curti finished a cross ice feed from Colby Sissons on the power play. Shortly after, Mikael Robidoux hit Blake Thompson in the corner to the left of the Adirondack net and was assessed a major penalty for boarding and game misconduct, but the Mariners penalty kill came up big to keep the game tied, heading to the third.

At 5:59 of the third, Thunder defenseman Kelly Summers was called for high-sticking, and the Mariners quickly cashed on the power play. Terrence Wallin won the faceoff back to Zach Tolkinen, who fed Ryan Culkin – and then Alex Kile, who ripped a sizzling shot over McAdam to give Maine a 2-1 lead. After a Colby Sissons slashing minor at 13:36, the Mariners man advantage unit struck again for insurance, as Culkin found Ronning just below the hash marks for a quick snap shot past McAdam’s glove, and his second goal of the game. Kile later joined the two goal club with an empty net goal at 17:57. Ted Hart and Michael McNicholas also had assists in third period for the Mariners.

In net, Francois Brassard made 28 saves to earn his third win of the season, while McAdam turned aside 14 in the loss. The win was Maine’s fourth victorious trip in a row to Glens Falls, but their first ever in regulation time. The Mariners jumped over Adirondack in the North Division standings to reclaim the fourth and final playoff spot. The Mariners now have five more wins than the Thunder and still four games in hand.

The Mariners are off to Brampton, Ontario, where they’ll play three this weekend against the Brampton Beast on Friday, Saturday, and Sunday. They’ll return home on Friday, January 24th for Star Wars night, against Worcester once again. It’s a “1-2-3 Friday,” featuring $1 Aquafina, $2 Pepsi products, and $3 Bud Light Drafts through the start of the 2nd period. Star Wars characters from local fan groups will be on hand, and the first 2,000 fans in attendance will get a Mariners t-shirt courtesy of Unifirst. Groups of 10 or more can get discounted tickets to all games by calling 833-GO-MAINE. Individual tickets can be purchased at MarinersOfMaine.com, at the Trusted Choice Box Office inside the Cross Insurance Arena, or by calling 207-775-3458.