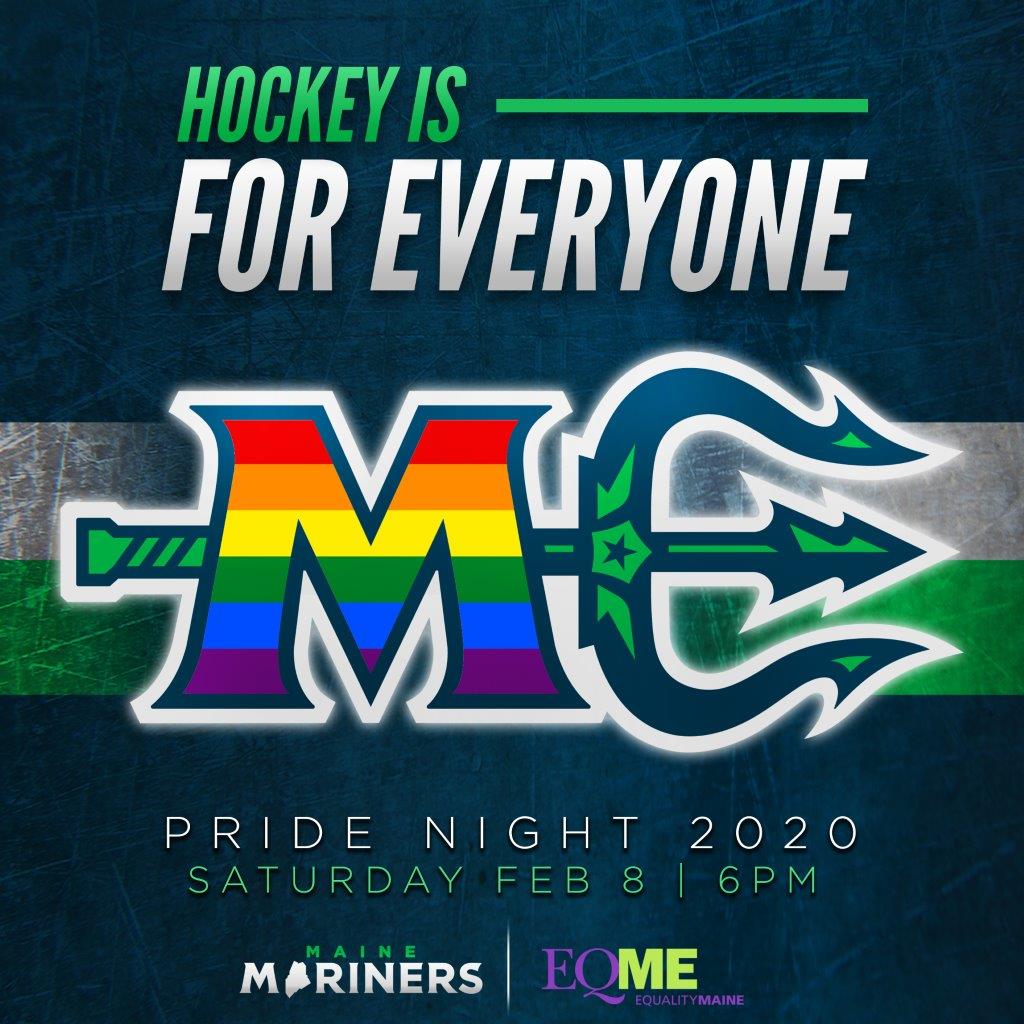 PORTLAND, ME – January 28, 2020 – The Mariners and EqualityMaine have partnered for the second year in a row to bring “Pride Night” to the Cross Insurance Arena. Also part of the “Hockey is for Everyone” and “You Can Play” initiatives, the night will be Saturday February 8th at the Mariners host the Brampton Beast at 6 PM.

Pride Night is the second game of the “Giving 3Kend,” which features three consecutive home games from February 7th through 9th at the Cross Insurance Arena. EqualityMaine, the game night sponsor, will give away Pride-themed sunglasses to the first 2,000 fans in attendance. The Mariners will skate out during introductions under rainbow colored lights, and Mariners logo glitter tattoos will be offered on the concourse. Video of Mariners players and coaches emphasizing that hockey is for everyone will air on the video board.

“Hockey and happiness are for everyone, and we think you get both at a Mariners game,” said Adam Goldberg, Mariners Vice President of Business Operations. “Pride Night is an important promotion to us to remind everyone in our community that you can always come to a Mariners game as you are. Pride night is about acceptance, empathy and understanding. If we can make one person more comfortable in their own skin through hockey, this promotion is an enormous success.”

Mariners pride t-shirts will be sold at the merchandise stand, with five dollars of each shirt purchased benefitting EqualityMaine.

EqualityMaine is the oldest and largest statewide organization dedicated to securing full equality for LGBTQ+ people in Maine through political action, community organizing, education, and collaboration. From youth-focused and youth-centered programs to community-building with LGBT older adults, EqualityMaine is here to advocate and provide support every step of the way. Learn more about the organization at EqualityMaine.org

“We know what LGBTQ+ youth are often excluded from sports, so being able to partner with an organization like the Maine Mariners shows that you can be both LGBTQ+ and a member of the hockey community,” says Shane Diamond, Communications Director for EqualityMaine. “Hockey really is for everyone, and as a transgender former college hockey player, I have experienced how events like this show our young people that they shouldn’t have to choose between LGBTQ+ and a hockey player.”

Last season, over 4,000 people attended the inaugural Pride Night on February 9th, 2019 as the Mariners faced off against the Greenville Swamp Rabbits.

Puck drop is scheduled for 6:00 PM on February 8th between the Mariners and Brampton Beast, with doors opening to general ticket holders at 5 PM. Family Four Packs are also available for all Saturday and Sunday games, which include four tickets, four food and drink vouchers, and four Mariners beverage koozies, all for as low as $80. Family Four Packs must be purchased in advance of game day. Groups of 10 or more can get discounted tickets to all games by calling 833-GO-MAINE. Individual tickets can be purchased at MarinersOfMaine.com, at the Trusted Choice Box Office inside the Cross Insurance Arena, or by calling 207-775-3458.