PORTLAND, ME – October 13, 2018 – In a helter-skelter type game at the Cross Insurance Arena on Saturday night, the Adirondack Thunder topped the Maine Mariners 6-3 as professional hockey made its triumphant return to Portland.

The Mariners fell into an early 3-0 hole, started off by a goal just 1:02 into the game by Brian Ward. Desmond Bergin doubled the lead to 2-0 at 5:06 and then John Edwardh connected on the power play at 9:14 to stretch the lead to three goals. Less than a minute later Jason Salvaggio scored the first goal in franchise history with a one-timer set up by Scott Savage and Antoine Waked, a power play goal to put the Mariners on the board. The Mariners were outshot 12-5 in the opening period.

It looked like the Mariners were hot on the comeback trail when Ryan Culkin blasted home a power play goal just 1:31 into the 2nd period. Drew Melanson and Riley Bourbonnais set up the point shot that found its way past Thunder goaltender Colton Phinney. Adirondack seized control of the game again with two goals between 2:06 and 3:30 of the 2nd from Conor Riley and Edwardh. Alex Kile scored on a breakaway at 12:24, but the Mariners remained down by two when the second intermission hit early due to an injury to the referee.

Maine had early chances in the 3rd but couldn’t solve Phinney who made numerous key saves. Maine’s Brycen Martin fought Riley to energize the crowd, but a Shane Conacher power play goal at 13:36 was the final nail in the coffin. Phinney stopped 26 of 29 for the win while Mariners goaltender Brandon Halverson made 37 saves on 43 shots.

The Mariners are back home Friday to host the Reading Royals for a 7:15 PM puck drop at the Cross Insurance Arena. It’s the first “1-2-3 Friday” of the season: $1 hotdogs, $2 popcorn, and $3 Bud Lights. Individual tickets can be purchased at MarinersOfMaine.com. 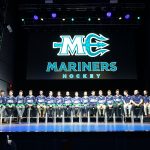