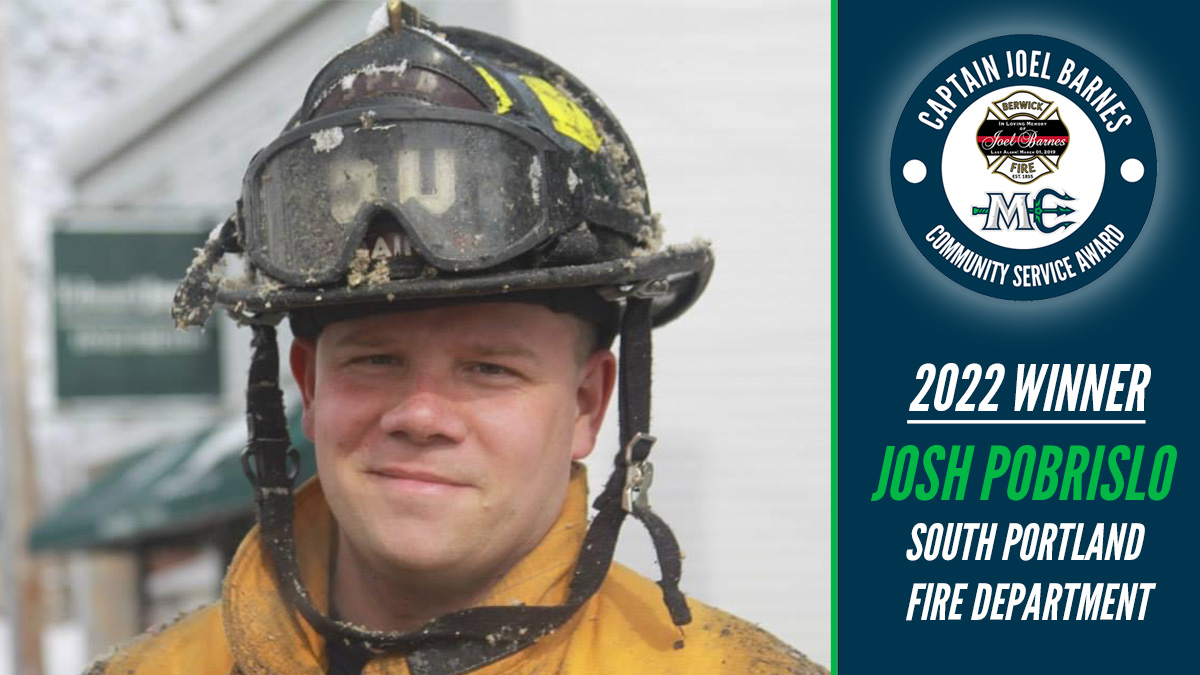 Pobrislo is a firefighter and community paramedic, who also serves as the City of South Portland’s Local Health Officer. His contributions to the community have revolved around assisting the less fortunate.

According to his nomination: “In response to an unusual and unexpected influx of unhoused individuals, families and refugees, Pobrislo implemented an outreach program to assist these vulnerable populations with access to basic medical care, services and essential supplies. Josh has worked to secure funding for this Community Outreach Program and has liaised with a number of other government agencies and NGO’s to provide this service. He has organized staffing via EMT’s and Paramedics from the South Portland Fire Department and helped to foster compassionate and helpful relationships reducing the burden that otherwise would be placed on the local 911 system.”

“In the fire service, we don’t do what we do to get recognition or accolades,” said Pobrislo. “We do what we do because it is important. This award means a great deal to me and I hope it means just as much to all those who believed in the mission of the Community Outreach Program. This is because Community Outreach and its mantra of “Promoting Wellness Through Education, Prevention, Compassion” would not have been able to touch so many lives without the help and support of my peers. It is one thing to be recognized by the public, but when you can be recognized by your peers it means that they see the sacrifice of what it takes to care about your community and all those in it. I can’t thank you all enough for this honor and for recognizing the work of the Community Outreach Program through the Captain Joel Barnes Community Service Award.”

The Barnes Award committee is made up of Mariners employees and members of Teamsters Local 340, and the Berwick Volunteer Firefighters Association. It sought out active or recently retired Fire and EMS responders in the state of Maine with three or more years of service, who “demonstrate outstanding professionalism and service to their community, and a commitment to promoting life safety education.”

“We are proud and grateful to be a part of recognizing local heroes,” said Adam Goldberg, Mariners V.P. of Business Operations. “The Captain Barnes Community Service Award not only recognizes someone in our community that goes beyond the call of duty, but keeps the memory of Captain Barnes alive. It has been a great experience giving awards out to three distinguished first responders and the Mariners would like to congratulate Josh Pobrislo on being this year’s recipient.”

Captain Joel Barnes was just 32 years old when he succumbed to his injuries on March 1st, 2019 after fighting a fire in Berwick, and saving the life of a fellow firefighter. A public memorial service was held one week later at the Cross Insurance Arena, with over 7,000 attendees present. Barnes had served with the Berwick Fire Department for two years and was the Training Safety Officer for the Department. The Captain Joel Barnes Community Service award was created in his memory the following fall, and was initially awarded at a Mariners game on the one year anniversary of Barnes’ death – two years ago today.

Runners up for the 2022 Captain Joel Barnes Community Service Award include: Rick Dunbar (Gray Fire Rescue), Russ Grady (Goose Rocks Beach Fire Department), Larry Straffin (North Berwick Fire Department), and David Osgood (York Beach Fire Department). All finalists will be recognized at the Mariners game on Sunday, March 20th against the South Carolina Stingrays at 3:00 PM. The annual “Battle of the Badges” championship will precede the game. Fans get purchase a bundled ticket to the both events HERE. The initial rounds of Battle of the Badges will be held at the Cross Insurance Arena on March 13th, as the Mariners are on the road.