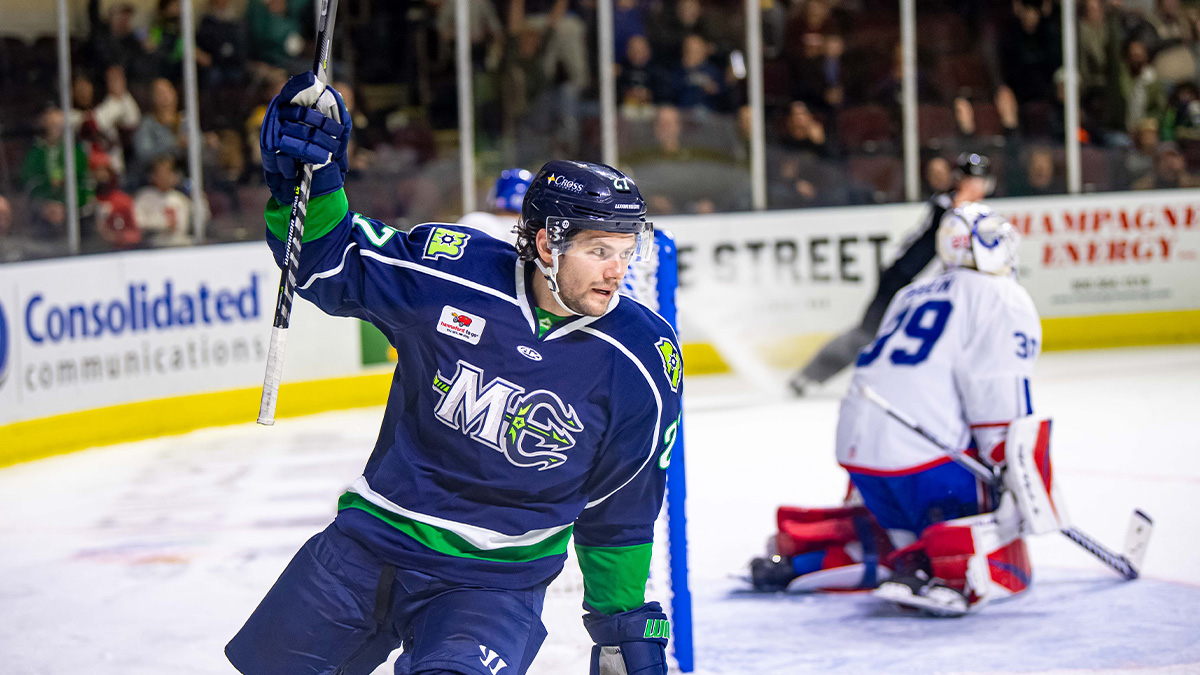 PORTLAND, ME – November 14, 2021 – Mariners rookie forward Patrick Shea probably couldn’t have dreamt of a better professional debut. The 2020 graduate of the University of Maine scored the opening goal of the game and added a fight to help the Mariners defeat the Trois-Rivieres Lions 4-3 on Sunday afternoon at the Cross Insurance Arena.

At 15:52 of the opening period, Shea took a breakaway flip pass from Keltie-Jeri Leon and skated in alone, beating Lions netminder Kevin Poulin for a 1-0 Mariners lead. The Mariners played one of their stronger first periods of late, outshooting the Lions, 12-9, and getting a strong start from Jeremy Brodeur.

Jeri-Leon was the catalyst on the second goal of the game as well early in the 2nd, as he danced through the Lions defense and deked Poulin to the backhand. After Poulin made the save, Cam Askew followed up and tipped the rebound into an open net to extend the lead to 2-0 at 5:46 of the 2nd period. As Brodeur preserved the two goal lead through the middle stages of the period, the Mariners added another at 15:14. Connor Doherty spotted Pascal Laberge sitting to Poulin’s left. Laberge then fired to Justin Brazeau in front, and Brazeau finished his third goal of the season to make it a 3-0 game. Shea then fought Trois-Rivieres’ Guillame Beaudoin. With just 1:30 left in the frame, the Lions finally got on the board, when Shawn St-Amant fired one behind Brodeur to make it 3-1.

Conner Bleackley was assessed a major penalty for boarding early in the third, giving the Lions a five minute power play. While the Mariners killed it, Trois-Rivieres found the net just a moment after the penalty expired, as Cedric Montminy, camped on top of the crease, deflected one past Brodeur to make it a one goal game. The Mariners power play, which was the top unit in the ECHL entering play, converted just over two minutes later to restore the two goal lead. Brazeau slid a puck back out to Pascal Laberge who fired over a sprawling Poulin at 10:38 making it 4-2. The Lions refused to go away, with Montminy scoring again at 13:41, which set up a dramatic finish. The Mariners defense, along with Brodeur, held the fort and Maine escaped with the 4-3 win.

Brodeur now has all three Mariners wins, as he stopped 31 in the victory. Poulin also stopped 31 in the losing effort. The Mariners improve to 3-3-1-0 as they embark on a four game Florida trip, beginning Tuesday morning at 10:30 AM in Jacksonville.

The Mariners return home for a pair of games around Thanksgiving on November 24th and 26th. They’ll host the Worcester Railers on Wednesday the 24th at 7:00 PM as the VIP Rivalry Cup continues. The Newfoundland Growlers come to town on the 26th for a 7:15 PM faceoff and Marvel Super Hero™ Night, which will feature Black Panther specialty jerseys. Individual tickets can be purchased online at MarinersOfMaine.com or by visiting the Trusted Choice Box Office inside the Cross Insurance Arena.