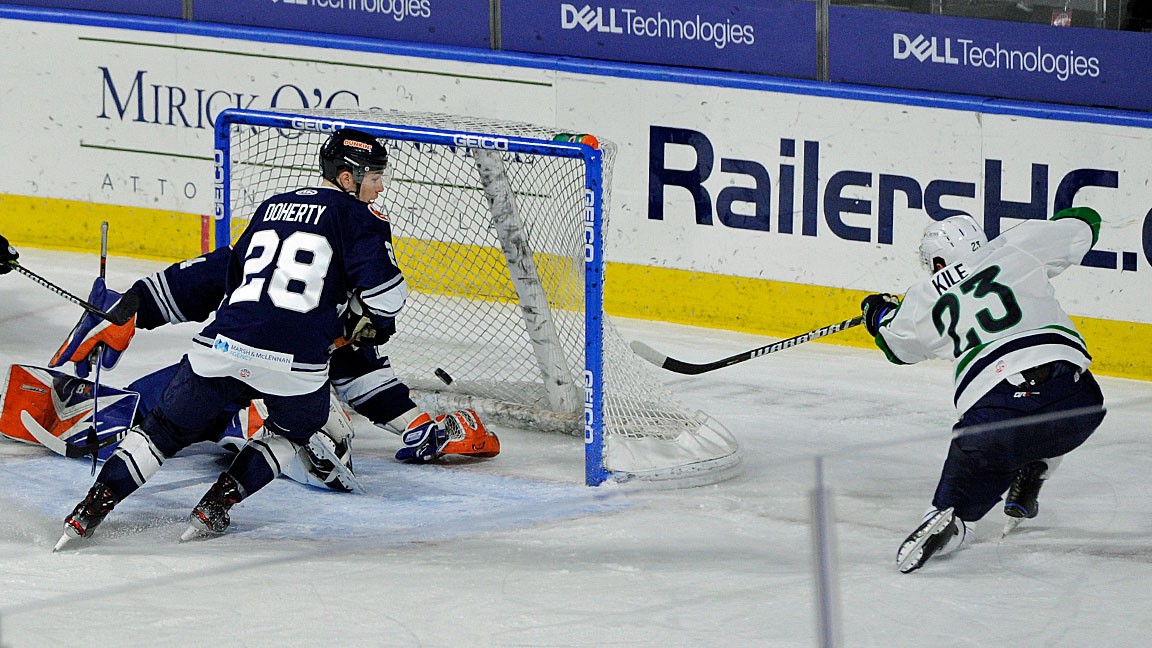 PORTLAND, ME – December 13, 2019 – Michael McNicholas scored two goals including the game-winner on a penalty shot in the 2nd period, while Connor LaCouvee made 27 stops and the Mariners defeated Worcester 4-2 on Friday night at the DCU Center in Worcester. It was Maine’s fourth win in a row, and it pulled them within one point of the Adirondack Thunder for fourth place in the North Division.

The first period saw three goals in the middle stages – in a span of three minutes and 37 seconds. Michael McNicholas broke the scoreless tie at 10:42 when he worked a give and go with Greg Chase deep in the Worcester zone. Chase fed McNicholas in the slot, who put a shot just under the crossbar for a 1-0 Maine lead. Ted Hart picked up the secondary assist on the play. Just 19 seconds later, Kyle Thomas’ shot from out beyond the high slot found its way through Mariners netminder Connor LaCouvee to quickly tie the game. At 13:19, Maine went back ahead after Jake Elmer’s wraparound was cleaned up on the opposite side of the net by Alex Kile, who banked the puck off Railer goalie Evan Buitenhuis and in for his fifth of the season. Shots favored the Mariners 12-8 at the end of one as they took the 2-1 lead into the locker room.

The lone goal of the 2nd period was scored again by McNicholas, coming on a penalty shot at 11:58. McNicholas was hooked on the second of two Mariners shorthanded breakaways, and beat Buitenhuis’s glove on the penalty stop attempt. It was the first Mariners penalty shot of the season, and second all-time, both by McNicholas, and both against Worcester. With around three minutes to go in the period, LaCouvee made a stunning sprawling save to rob Yanick Turcotte of what looked like a sure goal. The Mariners also killed two penalties in the middle frame.

With 12:17 remaining in the 3rd, Barry Almeida brought the Railers back to within one when he threw a puck from the corner off a Mariners skate and in behind LaCouvee. The goal was initially disallowed but overturned upon video review. The Mariners added insurance with a power play goal by Greg Chase at 15:26, a perfect wrist shot from the right circle over Buitenhuis’ stick side. Chase broke a 10 game drought without a goal and also snapped a Mariners 0-for-27 power play skid.

LaCouvee won his 6th game of the season with 27 stops while Buitenhuis made 22 saves in the loss.

The Mariners play another in Worcester tomorrow night at 7:05, followed by a two game series in Glens Falls next weekend and are back home on December 26th and 27th to host Adirondack and Reading. Thursday, December 26th is a 7 PM faceoff and is Nickelodeon Takeover Night featuring Teenage Mutant Ninja Turtles Specialty Jerseys. The puck drops at 7:15 PM on Friday, December 27th and is STEM Night – focusing on science, technology, engineering, and mathematics. It’s also a 1-2-3 Friday, featuring $1 Aquafina water, $2 Pepsi products, and $3 Bud Lights through the start of the 2nd period. Both games also feature the “Skate and Scarf” package, where fans can get a ticket to the game, a Mariners scarf, and a pre-game skate with Beacon the Puffin plus a snack buffet. Only 100 packages are available for each game.