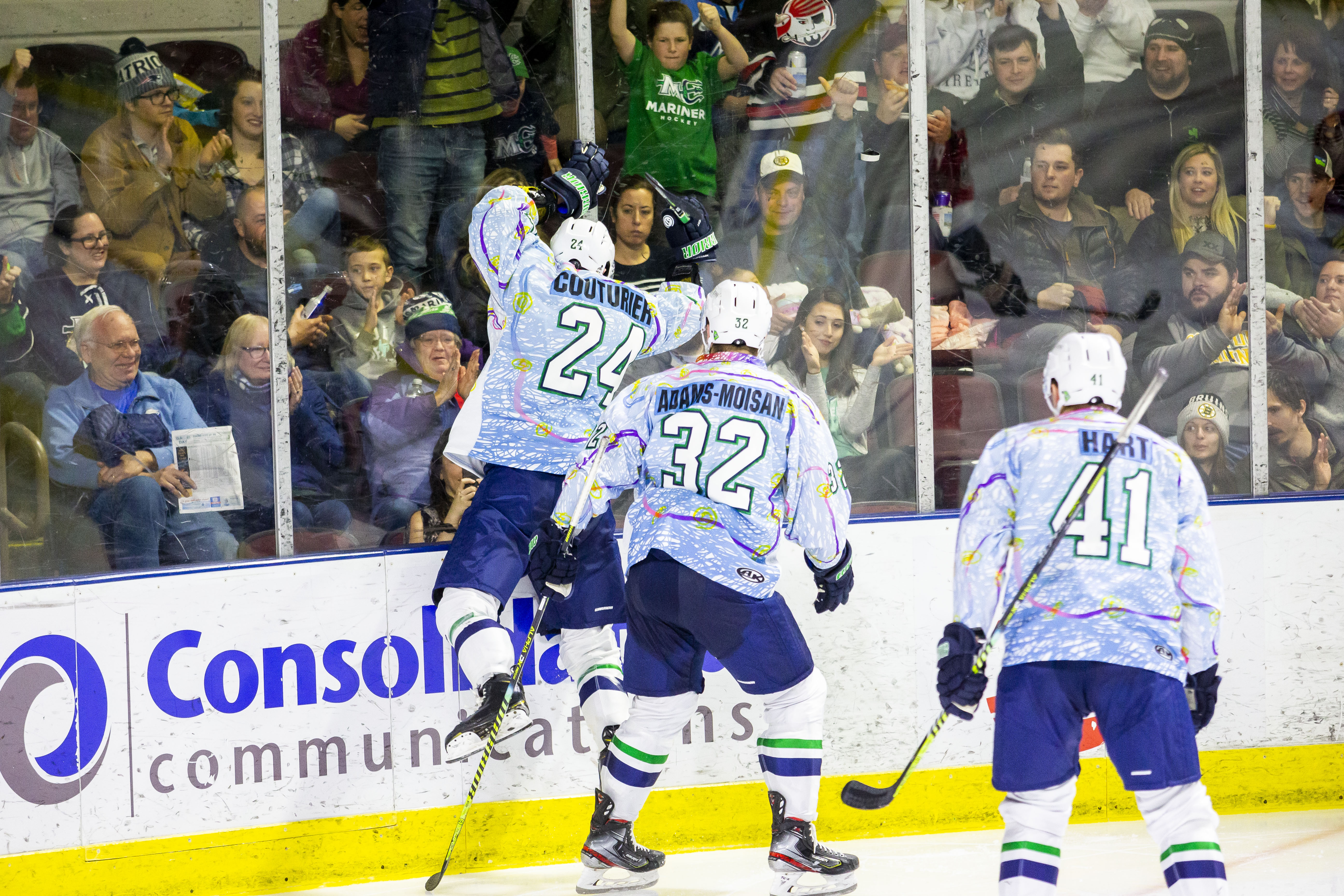 PORTLAND, ME – February 1, 2020 – Michael McNicholas delivered the overtime winner at 1:21 of the extra session to give the Mariners a 3-2 win over the Adirondack Thunder on Saturday night at the Cross Insurance Arena. The It was Maine’s third win of the week against the Thunder, and their 11th in 15 meetings this season with Adirondack. Maine is now just two points out of third place in the North Division playoff race..

“We’re coming together as a team,” said Mariners defenseman Josh Couturier, who scored his first goal of the season in the win. “We’re playing the right way, we’re getting pucks in, everyone’s blocking shots, you’re able to look to the guy next to you and you know he’s going to do the right thing.”

Couturier broke a 1-1 tie at 2:09 of the third after great work by the line of Eddie Matsushima, Morgan Adams-Moisan, and Brian Hart. It was Couturier’s first point of what has been an injury-riddled season. Just 1:30 after Couturier’s go-ahead goal, Adirondack’s Mike Szmatula evened up the score, setting the stage for the eventual overtime.

The scoring began with a Dillan Fox power play goal at 5:05 of the first, backhanding the rebound of a blocked shot around the pad of Thunder netminder Evan Cormier. The Mariners carried the 1-0 lead into the 2nd, but defenseman Colby Sissons scored on the power play at 5:39 of period two for Adirondack with a point shot that seemed to turn the game in Adirondack’s favor. The Mariners were outshot 11-5 in the middle frame but led by Francois Brassard, kept the game tied into the third.

“I thought we played hard,” OT hero Michael McNicholas said. “I thought our push off the bat in the first was really hard. I felt they came back at us just as hard in the second. It was kind of back and forth all game so it’s really nice to get that win. Those two points are really big for us.”

Coming out of their defensive zone early in overtime, Greg Chase darted down the left wing, dropping a pass to Sean Day, who found McNicholas at the far circle. McNicholas one-timed the feed off the back crossbar inside the net to end the game. It was McNicholas’ sixth goal of the season.

“Those are big confidence builders,” said Mariners head coach Riley Armstrong about the Couturier and McNicholas goals. “Getting [Couturier] off that and getting him back playing again and also for [McNicholas] he hasn’t scored too many this year so he came up big for us.”

Brassard made 25 saves to earn his fourth win – all against Adirondack. Cormier made 19 stops in the loss. The Mariners improved to 7-1-1 in OT and SO games this season and 20-3-2 all-time. They have reached 50 points with their third win in a row – two behind third place Brampton with a game in hand. They are now three points clear of the Thunder for a playoff spot.

The Mariners continue their homestand Tuesday against the Worcester Railers at 7 PM. They’re also home all three dates next weekend – February 7th, 8th, and 9th for the “Giving 3Kend,” sponsored by Three Dollar Deweys. Friday night at 7:15 PM vs. Worcester is “Works For ME Night,” presented by News Center Maine and a 1-2-3 Friday: $1 Aquafina water, $2 Pepsi products, and $3 Bud Light Drafts through the start of the 2nd period. Saturday at 6 PM against Brampton is Pride Night with EqualityMaine, including a sunglasses giveaway for the first 2,000 fans in attendance. On Sunday at 3 PM against Brampton once again, it’s the “Underwear Toss,” with fans encouraged to throw new packages of underwear onto the ice after the first Mariners goal to benefit Preble Street Teen Services.

MARINERS WEEKLY: MOVIN’ ON UP
Scroll to top