NORFOLK, VA – February 15, 2019 – For the second straight game, the Maine Mariners came from behind in the third and prevailed in overtime. Michael McNicholas played hero on Friday night at the Norfolk Scope, scoring the game-winner at 2:30 of OT to get the Mariners a crucial two points on the road and their third win in a row.

The Admirals scored the only goal of the opening period when he backhanded an active carom off the backboards over a sprawling Connor LaCouvee at 7:16 of the first. The Mariners took three penalties in the first, starting the second shorthanded as well.

Norfolk doubled their lead at 2:19 of the second when Kelly Klima scored a power play goal, finishing off Ben Duffy’s drive to the net off a faceoff win. The Mariners responded with a power play goal of their own at 5:34 of the period when Greg Chase patiently waited and slid a pass to Michael McNicholas for a back-door tap in. The Admirals went back up two at 8:14 as Jake Wood beat Connor LaCouvee to the back post finishing a second chance after missing a 3-on-1. The Mariners closed the deficit again at 15:33 with a conversion of a 2-on-1, Josh Couturier feeding Dwyer Tschantz for his third goal of the season. Maine trailed 3-2 at the end of two.

It took only 1:20 in the third for the Mariners to get even when Greg Chase ripped a shot past Ty Reichenbach off a McNicholas faceoff win. The game remained tied through the end of regulation, with the Mariners holding a 33-32 shot edge.

Like Wednesday, the opponent controlled the first half of overtime, but at the exact halfway point, McNicholas pulled a fake toe-drag and then beat Reichenbach with a wrist shot to end the game. Chase completed a three point night of his own with an assist. LaCouvee stopped 31 of 34 for his seventh win. Maine improved to 7-0-1 in games advancing beyond regulation, and have won seven straight. They snapped a four game road losing streak with the win.

The Mariners are back in Norfolk tomorrow night at 7:00 PM for the second of five straight on the row. The next home game is Sunday, February 24th at 3:00 PM, when Worcester comes to town again. A full team autograph session will follow the game. Single game tickets can be purchased HERE or by visiting or calling the Trusted Choice Box Office: 207-775-3458. 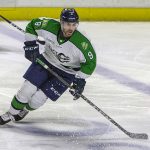 MARINERS WIN FOURTH IN A ROW, SWEEP ADMIRALS IN NORFOLK
Scroll to top