PORTLAND, ME – January 29, 2022 – Nick Master’s shorthanded wraparound goal with 4:19 left in the game broke a 1-1 tie and lifted the Mariners to a gritty 2-1 win over the Reading Royals on Saturday night at the Cross Insurance Arena. The Mariners handed Reading just its second regular loss in their last 11 contests.

The lone goal of the opening period was scored at the 15:09 mark by Reading’s Jacob Pritchard. Mariners goaltender Jeremy Brodeur got stuck trying to get back to his skates, and Pritchard was able to bank it off of the netminder and in from below the goal line.

It was the Mariners finding the only goal of the 2nd, and using the power play to do so. Midway through the period, Nick Master centered a pass to Askew from behind the Royals net, and Askew shot it past a disoriented Kirill Ustimenko to tie the game. Mathew Santos collected the secondary assist and the game entered the 3rd period tied at one.

With a 5:30 remaining in regulation, the Mariners were assessed their first penalty of the game when Santos was called for holding. Toward the end of the penalty kill, Master chipped the puck down the ice and caught Ustimenko in a state of indecision. The Royals goaltender let Master pick up the puck and beat him on a backhanded wraparound to the far post to give Maine a 2-1 lead. From there, the Mariners held off Reading’s 6-on-5 attack to close out the one-goal win.

After a shaky start on Friday, Brodeur bounced back in a big way with 31 stops on 32 Reading shots. It was his 11th win of the season. The Mariners improved to 2-0-0 against the Royals this season.

The Mariners (16-15-3-1) finish the $3 Dewey’s “3kend” tomorrow, hosting the Trois-Rivieres Lions at 5 PM. It’s the second annual “Underwear Toss” game. Fans are asked to bring new packages of underwear to throw onto the ice after the Mariners first goal, to benefit Preble Street. The Mariners will also be wearing their green alternate jerseys for the third time this season. Individual tickets for all games can be purchased online at MarinersOfMaine.com/tickets or by visiting the Trusted Choice Box Office inside the Cross Insurance Arena. 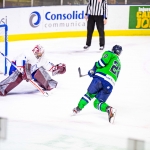