PORTLAND, ME – December 10, 2021 – Nick Master supplied all the offense while Callum Booth made 35 saves and the Mariners snapped a six game losing streak with a 3-2 win over the Worcester Railers on Friday night at the Cross Insurance Arena. Master recorded the first hat trick of his pro career and the Mariners’ fourth of the season already.

Master would open the scoring at 6:47 of the first, as he camped on the doorstep and backhanded home a rebound produced by a Brendan St-Louis point shot. The assist was St-Louis’ first professional point. That was the only scoring of the first period, as the Mariners held a 16-9 shot advantage. A pair of fights also broke out, as Maine’s Cam Askew and Worcester’s Charlie Spetz dueled, followed by a bout between Mariners forward Jake Bricknell and Railers forward Carlos Fornaris.

In the 2nd period, the key play came around the 16:00 mark of the frame. Callum Booth made a desperation pad save on Worcester’s Nolan Vesey and the Mariners countered with Master’s second goal of the night. Mathew Santos fed Westin Michaud, who found Master to right of Railers goaltender Jimmy Poreda. Master with a patient move, pulled the puck to his backhand and slid it into an open net to double the Maine lead to 2-0 heading into the second intermission.

Michaud helped set up Master again for his hat trick goal at 7:52 of the third. After Poreda stopped him in the slot, Michaud found Master sneaking out from below the goal line to Poreda’s left, and Master buried his third goal of the game. It was already the fourth Mariners hat trick in just 11 home games, joining Ed Tralkmaks (Oct. 22), Lewis Zerter-Gossage (Nov. 12), and Alex-Olivier Voyer (Nov. 24). Three of the four “tricks” have come against the Railers. Michaud assisted on all three goals.

The Railers began their comeback effort at 15:45 when defenseman Will Cullen got his first professional goal, sliding one around Booth from just to left of the Mariners net. With the goalie pulled, the Railers got within a goal, after a video review confirmed that Ross Olsson was able to jam a puck across the plane of the goal line, in front of Booth’s leg pad. A second review took place with just 9.9 seconds left, after the Railers put a puck near the goal line, but the Mariners got that call in their favor, and held on for the 3-2 win.

A crowd of 3,351 turned out to witness the Mariners snap their losing streak, the second largest crowd of the season.

The Mariners (7-8-3-1) embark on a six game road trip beginning tomorrow at Worcester at 7:05 PM. All Mariners home games are broadcast on FloHockey.tv and on the Mariners Radio Network at MarinersofMaine.com/listen. The next home game is Wednesday, December 29th, also against Worcester, a 3:00 PM faceoff and Kids Day. The first 500 kids will receive a Mariners silicone bracelet and a postgame family skate will follow. Individual tickets for all games can be purchased online at MarinersOfMaine.com/tickets or by visiting the Trusted Choice Box Office inside the Cross Insurance Arena. 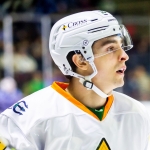