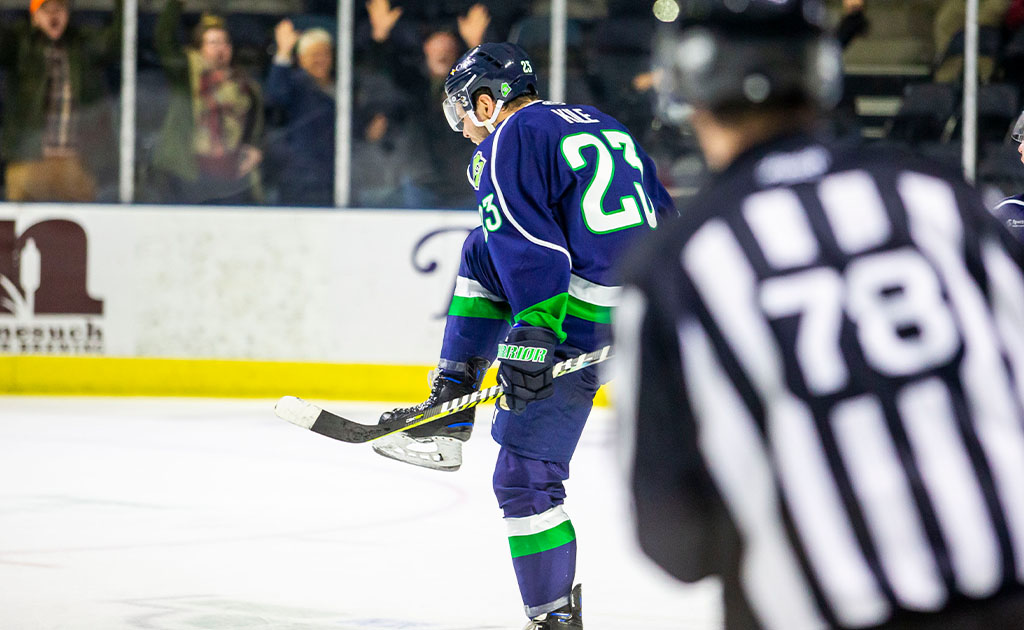 PORTLAND, ME – November 11, 2019 – The Mariners are becoming famous for their come-from-behind wins. Monday’s edition looked a little different, but the result was the same for the third straight game. Alex Kile’s power play goal at the :23 mark of overtime, lifted Maine to a 4-3 win over the North Division-leading Reading Royals at the Cross Insurance Arena.

The scoring was started 6:31 into the game when the Royals notched the first goal. Defenseman Jacob Graves blasted a shot home from the point past Mariners’ goaltender, Connor LaCouvee on his stick side. LaCouvee couldn’t regain position after stopping a few chances off a net-mouth scramble. Maine rebutted with one of their own at the 10:43 mark, when Ryan Ferrill chipped the puck off the boards to himself and broke into the offensive zone. Ferrill recollected it in the corner and immediately sent the it to the front of the net where he found Terrence Wallin. who scored in his fourth consecutive game. Taylor Cammarata also received an assist on the play. It only took Reading just over a minute later to retake the lead. Royals forward Pascal Laberge caught the puck out of mid-air, and after it rolled off the back of the net, he tossed it out front where he found Corey Mackin who poked it through LaCouvee. Reading outshot Maine 16-5 in the first.

After an even middle frame, the Mariners outshot Reading 11-10, but the score didn’t change. Ustimenko and LaCouvee both stood tall in their respective nets, while Morgan Adams-Moisan and Jacob Graves dropped the gloves.

The Mariners got even just 26 seconds into the final period of regulation. Dillan Fox was able to drive wide and take the puck to net, creating a rebound for Terrence Wallin to cash his second goal the game. The line converted again at 13:08 to give Maine its first lead. Wallin cycled the puck down to Cammarata, who fed it out front to Fox, whose backhand went around Ustimenko’s pad. Despite giving up the lead, Reading battled back. With only 29 seconds left in the third, Reading pulled their for the extra attacker and Hayden Hodgson’s deflection from a Matty Gaudreau shot evened the score and forced overtime.

At the 20:00 mark of the third, Graves was called for cross-checking, giving the Mariners a power play to begin overtime. It took just 23 seconds for the Mariners to find the back of the net, when Ryan Culkin and Greg Chase set up Alex Kile for a one-timer at the right circle. It was Kile’s first goal of the season.

Reading outshot the Mariners 39-30 in the game. LaCouvee stopped 36 to earn his season win of the season. Reading remains atop the North, falling to 7-4-2-0, while the Mariners now have a winning record of 5-4-0-1, and 11 points in the standings.

The Mariners have two more home games this weekend. Friday, November 15th, is Wes McCauley Appreciation Night, as the Mariners honor the South Portland NHL referee, who will sign autographs during the first intermission. Game time is 7:15 PM against the Brampton Beast. It’s also a 1-2-3 Friday with $1 Aquafina, $2 Pepsi products, and $3 Bud Lights through the start of the 2nd period. Saturday, November 16th is Hockey Fights Cancer against the Adirondack Thunder at 6:00 PM. The first 1,000 kids will receive a pennant upon entry, courtesy of Q97.9. It’s a Family Four Pack night as well – families of four can get four tickets, four food and drink vouchers, and four Mariners can koozies for as low as $80. For more information and to purchase tickets, go to MarinersOfMaine.com, call 833-GO-MAINE, or visit the Mariners front office at 94 Free St. in Portland.